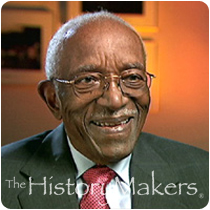 See how John Hope Franklin is related to other HistoryMakers

Dean of African American historians, John Hope Franklin was born January 2, 1915 in Rentriesville, Oklahoma. His family relocated to Tulsa, Oklahoma shortly after the Tulsa Disaster of 1921. Franklin's mother, Mollie was a teacher and his father, B.C. Franklin was an attorney who handled lawsuits precipitated by the famous Tulsa Race Riot. Graduating from Booker T. Washington High School in 1931, Franklin received an A.B. from Fisk University in 1935 and went on to attend Harvard University, where he received his A.M. and Ph.D. degrees in history.

Franklin began his teaching career at Fisk University before moving on to St. Augustine's College. It was at North Carolina Central University, in 1945, with a $500 advance from Alfred A. Knopf, and help from his wife, Aurelia, that Franklin began writing the classic African American history text, From Slavery to Freedom. The book, co-authored by Alfred A. Moss, Jr. is now in its seventh edition and is published in several different languages. Franklin taught at Howard University for nine years, before becoming the first black to chair the History Department at Brooklyn College in 1956. He was then hired by the University of Chicago in 1964 and chaired the History Department from 1967 to 1970. There, he served as the John Matthews Manly Distinguished Service Professor from 1969 to 1982, when he was made Professor Emeritus. In 1982, Franklin joined the faculty at Duke University as the James B. Duke Professor Emeritus of History.

Active in professional organizations, Franklin has been president of the Southern Historical Society, the Organization of American Historians and the American Historical Association. He is a life long member of the Association for the Study of African American Life and History, where he served on the editorial board of the Journal of Negro History. In 1997, he was appointed by President Bill Clinton as chairman of the advisory board for One America, the President's Initiative on Race.
Franklin has written hundreds of articles and at least 15 books. His recent works include Runaway Slaves: Rebels on the Plantations with Loren Schweninger, George Washington Williams: A Biography and a book about his father My Life and an Era: the Autobiography of Buck Colbert Franklin as well as his own autobiography, The Vintage Years. In 1978 Who's Who in America selected Franklin as one of eight Americans who have made significant contributions to society. Among his many other awards are the Organization of American Historians Award for Outstanding Achievement and the Presidential Medal of Freedom. In June 1997, PBS aired First Person Singular: John Hope Franklin, a film produced by Lives and Legacies Films.

Still sought after as a lecturer and advisor, Franklin lives in Durham, North Carolina, where he cultivates orchids.

Franklin was interviewed by The HistoryMakers on November 28, 2003.

See how John Hope Franklin is related to other HistoryMakers
Click Here To Explore The Archive Today!