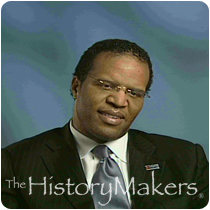 Nonprofit chief executive, author, activist and entrepreneur John Hope Bryant was born on February 6, 1966 in Los Angeles, California to Juanita Smith and Johnnie Will Smith. Bryant was raised primarily in Compton and in the South Central area of Los Angeles. He graduated from Santa Monica High School in 1984.

At the age of twenty-six, Bryant founded Operation HOPE immediately following the L.A. Riots of 1992 when the LAPD police officers charged with beating Rodney King were acquitted. Operation HOPE, Inc. is a non-profit, public benefit, investment banking organization. The organization is composed, in part, of a national network of inner-city banking centers called HOPE Centers, serving low-wealth communities by offering hope and converting check cashing customers to banking customers. These centers also provide financial literacy education. Bryant is also the author of Banking on our Future: a Program for Teaching You and your Kids about Money (2002). In 2004, Bryant was appointed by President George W. Bush to a 4-year term on the non-partisan U.S. Community Development Advisory Board for the CDFI Fund at the U.S. Treasury Department.

Bryant serves on the board of trustees for the First A.M.E. Church in Los Angeles, the national board for the Black Leadership Forum, the board of visitors for Xavier University, the board of governors for the City Club on Bunker Hill, the board of directors of the Southern California Committee for the Olympic Games, the national honorary board for the Underground Railroad Freedom Center, and the board of the John & Sheila Kennedy-Bryant Family Foundation. Bryant is also the namesake of the John Bryant Scholarship in Urban Social Development, a permanent scholarship fund, established and set aside to fund the dreams of deserving minority and low-wealth young adults at the University of Southern California’s School of Social Work.

Bryant has received more than 400 awards and citations for his work to empower low-wealth communities including the Use Your Life Award from Oprah Winfrey. In 1994, Bryant was selected by TIME Magazine for their “America’s 50 Most Promising Leaders of the Future” cover story. He became the first African American in history to be knighted by German nobility and the royal House of Lippe in 1998. He was named a “Community Hero” by People Magazine on the 10th anniversary of the L.A. Riots of 1992. Bryant received an Honorary Doctorate Degree of Human Letters from Paul Quinn College in Dallas, Texas, for his work around education and poverty eradication. The World Economic Forum in Davos, Switzerland nominated Bryant as one of 238 young leaders selected from around the world to serve as a member of the new Forum of Young Global Leaders. Bryant received the Dr. Martin Luther King, Jr. Excellence in Leadership Award at the 38th Annual Dr. Martin Luther King, Jr. Awards Dinner in Chicago, Illinois.

Bryant was interviewed by The HistoryMakers on December 3, 2008.