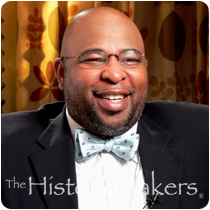 Favorite Color:
Green
Favorite Food:
Chicken And Dumplings
Favorite Time of Year:
Summer
Favorite Vacation Spot:
St. Louis, Missouri
Favorite Quote:
He Is No Fool Who Will Lose What He Cannot Keep To Gain What He Cannot Lose.

Favorite Color:
Green
Favorite Food:
Chicken And Dumplings
Favorite Time of Year:
Summer
Favorite Vacation Spot:
St. Louis, Missouri
Favorite Quote:
He Is No Fool Who Will Lose What He Cannot Keep To Gain What He Cannot Lose.

See how John Harris is related to other HistoryMakers

Founder and president of Encouragement Unlimited, Inc., John Leonard Harris was born on July 4, 1961 in St. Louis, Missouri to Reverend Eugene Harris, Jr. and Maeola Wilson Blanchard. Harris attended the University of Missouri-Columbia, where he obtained his B.A. degree in radio, television and film production in 1984.

In 1989, Harris published Campus Programming for Life: The Challenge of the 1990s and Beyond for the National Association for Campus Activities Research Foundation. He worked for the University of Nebraska at Omaha as a student activities advisor from 1989 until 1991, serving as the primary advisor for a variety of groups including the Women’s Resource Center, American Multicultural Students and the Disabled Students Agency, handling a budget of more than $100,000. In 1992, Harris was published in the Journal of Intergroup Relations where his “Portrayal of the Black Family in Prime time Network” piece was awarded the first “Article of the Year” Award by the National Association for Human Rights Workers.

In 1991, Harris became the special assistant to the Vice Chancellor for Student Affairs at the University of Nebraska-Lincoln and was involved in maintaining the presence of underrepresented minority populations on campus. In 1999, Harris joined the Lincoln based, City Impact, Inc. as the Men’s Youth Ministry Coordinator, leading a social club of primarily African American high school and middle school-aged boys. He remained there for three years.

Harris founded Encouragement Unlimited, Inc. in 2002, serving as chief executive and administrator for the faith-based charitable organization. In 2004, Harris returned to academia, working as a service-learning coordinator for Nebraska Wesleyan University.

In 2005, Harris obtained his M.Ed. degree from the University of Nebraska-Lincoln in Teaching, Learning and Teacher Education, and in 2006, he became an instructor at the University. Harris is a popular keynote and conference speaker, lecturing nationally in academia and to businesses on issues of diversity, cultural awareness, leadership, motivation and organizational effectiveness.

Harris is married to his wife Charlene (Maxey) of Lincoln, Nebraska, and they have four children, Preston, Shannon, JoAnna and John, Jr.

Harris was interviewed by The HistoryMakers on October 6, 2007.

See how John Harris is related to other HistoryMakers
Click Here To Explore The Archive Today!