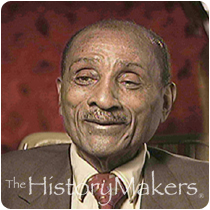 See how John H. Johnson is related to other HistoryMakers

John H. Johnson, widely regarded as the most influential African American publisher in American history, was born on January 19, 1918, in Arkansas City, Arkansas, to Leroy and Gertrude Johnson Williams. Growing up in Arkansas City, no high schools existed for black students, so Johnson repeated the eighth grade to continue his education. After moving to Chicago with his family shortly thereafter, Johnson attended DuSable High School, where he graduated with honors.

After graduating from high school, Johnson went to work for the Supreme Life Insurance Company while attending the University of Chicago. While with Supreme, he was given the job of compiling weekly news clippings for his boss, which eventually gave him the idea for his first publication, Negro Digest. In 1942, after graduating from the University of Chicago, he acted on this idea, and with a $500 loan against his mother’s furniture and $6,000 raised through charter subscriptions, Johnson launched Negro Digest, which later became Black World. Three years later, he launched Ebony, which has remained the number-one African American magazine in the world every year since its founding. In 1951, Johnson Publishing expanded again, with the creation of Jet, the world’s largest African American news weekly magazine.

In addition to his business and publishing acumen, Johnson was highly involved at both community and the national level. In 1957, he accompanied then-Vice President Richard Nixon to nine African nations, and two years later, to Russia and Poland. President John F. Kennedy sent Johnson to the Ivory Coast in 1961 as Special Ambassador to the independence ceremonies taking place there, and President Johnson sent him to Kenya in 1963 for the same purpose. President Nixon later appointed him to the Commission for the Observance of the 25th Anniversary of the United Nations.

Johnson was also the recipient of numerous awards that spanned decades, from the Spingarn Medal to the Most Outstanding Black Publisher in History Award from the National Newspaper Publishers Association. Johnson Publishing has also been named the number one black business by Black Enterprise four times. In 1996, President Bill Clinton awarded Johnson with the Presidential Medal of Freedom, the nation’s highest civilian honor. He also received more than thirty honorary doctoral degrees from institutions across the country, and served as a board member or trustee of numerous businesses and philanthropic and cultural organizations.

Johnson’s wife, Eunice, and daughter, Linda Johnson-Rice, continue to retain full control of Johnson Publishing as the only two shareholders in the company.

See how John H. Johnson is related to other HistoryMakers
Click Here To Explore The Archive Today!