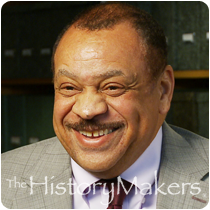 Favorite Color:
Blue
Favorite Food:
Paella
Favorite Time of Year:
Fall
Favorite Vacation Spot:
Barcelona, Spain
Favorite Quote:
I Am The Master Of My Fate. I Am The Captain Of My Soul.

Favorite Color:
Blue
Favorite Food:
Paella
Favorite Time of Year:
Fall
Favorite Vacation Spot:
Barcelona, Spain
Favorite Quote:
I Am The Master Of My Fate. I Am The Captain Of My Soul.

See how John H. Hall, Jr. is related to other HistoryMakers
Donate Now

Chemist and academic administrator John H. Hall, Jr. was born on September 24, 1946 to Mary Emma Hall and John H. Hall, Sr. He attended Morehouse College to receive his B.S. degree in chemistry with honors in 1969. With a scholarship for continued studies in chemistry, Hall then began his graduate studies at Harvard University. Hall worked with his research advisor, William N. Lipscomb, to better understand the nature of chemical bonds in boranes through electron orbital calculations. Lipscomb’s work in borane structure earned him the 1976 Nobel Prize in chemistry. Hall graduated from Harvard University with his Ph.D. degree in theoretical computational chemistry in 1974.

Pursuing post-doctoral research work, Hall worked with Dr. William Guillory to develop models of mechanisms of the photolytic reactions occurring to deplete the ozone in the atmosphere during the 1970s. In 1979, Hall became an associate professor of chemistry at Morehouse College and senior research scientist at the School of Geophysical Sciences at the Georgia Institute of Technology, where he continued his research in atmospheric chemistry. Hall continued to study the chemical compounds and reactions of the stratosphere, including the chlorine and fluorine nitrate series, and the vibrational spectra of nitrate geometric isomers. His later work also focused on the effect that high concentrations of these highly-reactive compounds on human health, particularly low-income populations.

Hall served as a consultant for Innovations International, Inc., a company started by William Guillory that specialized in organizational development. He also served as the associate vice president for research at The Ohio State University for seven years before returning to Morehouse College in 2001 as chair of the department of chemistry. Hall was later named the Bruce Raneur Professor of Natural Sciences at Morehouse College, where he has published numerous academic papers on physical and atmospheric chemistry. Hall and his wife, Susan Hall, also started Transformational Consultants International, Inc., where they specialized in improving workplace productivity and diversity. Hall's wife, Susan, passed away in 2008.

John Hall was interviewed by The HistoryMakers on April 14, 2011.

See how John H. Hall, Jr. is related to other HistoryMakers
Donate Now
Click Here To Explore The Archive Today!