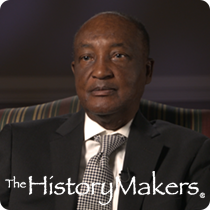 See how John Finney is related to other HistoryMakers

Nonprofit executive John Finney was born on October 31, 1938, in Savannah, Georgia to Ellis Finney and Margaret Maynor Finney. Upon his graduation from Savannah’s Alfred E. Beach High School in 1957, Finney worked as a medical assistant at the Hospital for Special Surgery in New York City. He later returned to Savannah, where he began his studies at Savannah Stage College. Following his service in the Vietnam War, Finney earned his B.S. degree in sociology in 1967. He went on to receive his M.A. degree in sociology from Clark Atlanta University in 1971.

Finney worked at the NAACP Youth Council, Savannah Branch under the mentorship of Savannah civic leader and historian W.W. Law in the mid-1960s. Finney also worked at the segregated Memorial Medical Center in Savannah and then joined The Economic Opportunity Authority for Savannah-Chatham County Area, Inc. (EOA) in 1967. In 1972, Finney became the acting executive director of the EOA. He and local ministers organized a lunch program in memory of Reverend Dr. Martin Luther King, Jr., which inspired the founding of the Dr. Martin Luther King, Jr. Observance Day Association. Finney was named the executive director of the EOA the next year, and served in this position until his retirement in 2017. During his tenure as executive director, Finney oversaw the development of Curtis V. Cooper Primary Health Care, Inc., which served the neighborhood of Woodville in Savannah, Georgia. He also partnered with the United Way to develop a clinic for sickle cell patients at Savannah’s Memorial Health University Medical Center; and provided a range of social services, including the housing facilities of the Tom D. Austin House, the Duffy Street SRO Homeless Shelter and the Peeler House. In the 2000s, Finney organized a program to educate community members about natural gas utility deregulation.

In addition to his work with the EOA, Finney served on the board of the Youth Futures Authority. He was involved in area healthcare initiatives like the Community Cardiovascular Council of Chatham County, Inc. and also worked with the Rape Crisis Center of the Coastal Empire and the Chatham-Savannah Voluntary Action Center, Inc.

John Finney was interviewed by The HistoryMakers on February 11, 2017.

See how John Finney is related to other HistoryMakers
Click Here To Explore The Archive Today!