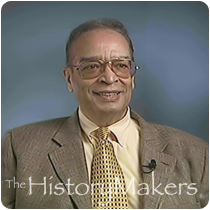 See how John E. Wilson is related to other HistoryMakers
Donate Now

John Ethelbert Wilson was a business executive and accountant. Known by his friends and family as Big John, Wilson was born on December 9, 1932, in Chicago, Illinois, to Carrie Simpson Wilson and Leroy Wilson. Among members of Wilson’s extended family were his uncle, Arthur Jewell Wilson, the first African American certified public accountant in Illinois, and his grandmother, Dora McDermott, a building owner and manager with property in Chicago’s Bronzeville/Grand Boulevard. Wilson grew up in the Bronzeville/Grand Boulevard area, and attended Wendell Phillips Elementary and High School, which counted amongst its alumni members of the original Harlem Globetrotters, Nat "King" Cole, Dinah Washington, and John H. Johnson.

Wilson went on from Wendell Phillips High School to Northwestern University’s School of Commerce, where he received his B.S. degree in 1954, and was the first African American to graduate from the program. Following college, Wilson served in the United States Navy from 1955 to 1957, returning to Chicago to work for his uncle from 1957 to 1963. It was during this period that Wilson married Velma Brown in 1960; they subsequently had two children, Ginger and Kelly.

In 1963, Wilson was hired by the State of Illinois Commerce Commission as an auditor. From there, Wilson went to work at Bowey's, Inc., as general accountant in 1964. Wilson became a certified public accountant in 1965, and became Capitol Food Industries, Inc.’s treasurer and Bates Packaging Company’s controller in 1969. Wilson also served as the president of John E. Wilson, Ltd., and assistant treasurer of the Public Building Commission of Chicago.

Sponsored by The Jay Pritzker Foundation

See how John E. Wilson is related to other HistoryMakers
Donate Now
Click Here To Explore The Archive Today!