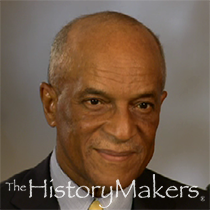 See how John E. Oxendine is related to other HistoryMakers

Media executive and entrepreneur John Edward Oxendine was born on January 20, 1943 in New York City, New York. He graduated from the Bronx High School of Science in 1959 and then received his B.A. degree in political science and sociology from Hunter College in 1965. Oxendine went on to serve in the U.S. Marine Corps from 1967 to 1973, and, in 1971, earned his M.B.A. degree from Harvard University’s Graduate School of Business, where he was awarded the John Hay Whitney Fellowship.

Oxendine worked first as a teacher for the New York City Board of Education, and then as a management advisor for the Bedford-Stuyvesant Restoration Corporation. In 1971, he became a management consultant for Fry Consultants in San Francisco, California, and in 1972, was hired as a senior associate by Korn Ferry Associates in Los Angeles, California. From 1974 to 1979, Oxendine worked as an assistant manager at the First National Bank of Chicago, and from 1979 to 1981, served as assistant chief in the Finance Assistant Division of the Federal Savings and Loan Insurance Corporation. Then, in 1981, Oxendine was named president and chief executive officer of Broadcast Capital Fund, Inc., a venture capital organization that provided assistance to minority controlled communications businesses.

Oxendine served as interim CEO and a member of the board of directors of Equity Media Holdings Corporation from June 2008 until January of 2009. He also served on the boards of Paxson Communications Corporation; Lockhart Companies, Inc.; Medlantic Healthcare Group; Family and Child Services of Washington, D.C.; the Interracial Council for Business Opportunity; the Minority Media and Telecommunications Council; the Monterey Institute of International Studies; the National Capitol Area YMCA; HSN, Inc.; Black Student Fund; the Palm Beach International Film Festival; Adopt-A-Classroom; and the Palm Beach County Film and Television Institute. In addition, he has authored several articles on venture capital and media investing that have been published in the Bar Association Law Journal, Duke University Law Review, Journal of Minority Business Finance, and Sound Management.

Oxendine was inducted into the Hunter College Alumni Hall of Fame in 1987 and the Minority Media and Telecommunications Council Hall of Fame in 2001. He lives in Boca Raton, Florida.

John E. Oxendine was interviewed by The HistoryMakers on September 9, 2014.

See how John E. Oxendine is related to other HistoryMakers
Click Here To Explore The Archive Today!