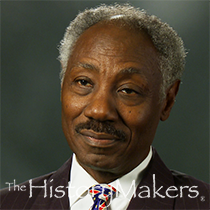 See how John E. Davis is related to other HistoryMakers

Broadcast journalist and media executive John E. Davis was born on November 3, 1947 in Wichita Falls, Texas to Tommy Christian and Myrtle Donaldson. Davis was raised in Wichita Falls and graduated from Booker T. Washington High School in 1966. He went on to attend Henderson County Junior College in Athens, Texas before transferring to Washington State University, where he received his B.S. degree in broadcast communications in 1970.

Upon graduation, Davis was hired as a news reporter for Fresno, California’s KMJ-TV. In 1977, Davis moved to KGW-TV in Portland, Oregon, where he served as a news reporter and anchor until 1982. Then, for the next twenty years, he worked as a general assignment reporter and later as a weekend anchor for Chicago, Illinois’ WBBM-TV. During his time at WBBM, Davis became the first United States news reporter to interview Nelson Mandela after he was released from prison in 1990. In addition to his work on television, Davis served as a news director and anchor for WVAZ Radio, and has hosted a real estate show on WLS-AM Radio and WIND-AM Radio.

In 2003, Davis founded and served as president of John E. Davis Media, a firm that serves politicians, corporate executives, celebrities and athletes by providing them high-end political consulting, media crisis management and public speaking coaching. Through his media company, Davis has worked on numerous political campaigns, including Scott Lee Cohen for Governor of Illinois; the Terrence J. O’Brien Campaign for Cook County Board President; Howard B. Brookins, Jr.’s Campaign for Cook County State’s Attorney; and Dorothy Brown’s Campaign for Mayor of Chicago.

Davis has earned many honors throughout his career, including a 1988 local Emmy Award for his coverage of Chicago Mayor Harold Washington’s death; an Ada S. McKinley Youth Services Mentor of the Year Award; the Better Communicator Award from the League of Black Women; and a Monarch Award for Outstanding Communicator. He has served as a board member of the Harold Washington Library and of the Greek-American Rehabilitation and Care Centre, and as a charter member of the Saltpond Redevelopment Institute and member of the We Care model program of the Chicago Public Schools and Chicago Police Department.

John E. Davis was interviewed by The HistoryMakers on October 21, 2014.

See how John E. Davis is related to other HistoryMakers
Click Here To Explore The Archive Today!