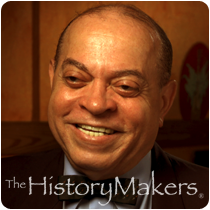 See how John "Deacon" Moore is related to other HistoryMakers

Rhythm and blues musician John Moore, commonly known as Deacon John, was born on June 23, 1941 to Frank P. Moore, a bricklayer, and Augustine Boudreaux, a homemaker and musician, in the 8th Ward of New Orleans, La. One of thirteen children, Moore was raised in a musical family. He received vocal training in his church choir; he sang in his first R&B band in middle school. Moore bought his first guitar at a pawnshop on Canal Street, and learned how to play it from the instruction books and records he purchased. Moore played in high school with various pickup bands as a singer and guitarist.

After playing for several years, Moore joined a musical group called the Ivories with Roger Lewis of the Dirty Dozen Brass Band. It was there that he picked up the nickname "Deacon," a term that drummer Al Miller tagged him with from a line in the song "Good Rockin' Tonight" by Roy Brown: "Deacon John and Elder Brown, two of the slickest cats in town ...” In 1960, Moore re-established the musical group the Ivories under the name Deacon John & the Ivories. Eventually they became the house band at the legendary Dew Drop Inn, backing up famous musicians like Bobby Blue Bland, Little Junior Parker, Arthur Prysock and Big Joe Turner. At the Dew Drop, Allen Toussaint discovered Moore and led him to the recording studio, where Moore began playing the guitar on R&B hits like Irma Thomas' "Ruler of My Heart," Aaron Neville's "Tell It Like It Is," Robert Parker's "Barefootin'," Ernie K-Doe's "Mother-in-Law," Chris Kenner's "Land of 1,000 Dances," and Lee Dorsey's "Working in the Coal Mine." In 1970, Moore performed at the first New Orleans Jazz & Heritage Festival, and has performed at each annual festival since.

In 2000, Moore was inducted into the Louisiana Blues Hall of Fame, and in 2003 he starred in Deacon John's Jump Blues, a CD and DVD tribute to New Orleans R&B, for which he earned the 2003 Offbeat music magazine award for Album of the Year. Gambit magazine awarded him three awards that year as well. In 2005, Moore performed at the Congressional Ball at the White House and in 2006, he starred in the critically acclaimed documentary, Going Back to New Orleans: The Deacon John Film. On July 25, 2006, Moore became the first African American president of New Orleans Musicians Union Local 174-496 of the American Federation of Musicians (AFM). Just one year later, Moore closed the inauguration of Louisiana Governor Bobby Jindal, performing “God Bless America” accompanied by the 156th Army Band and a Navy fly-over of jets. Later that year, Moore was inducted into the Louisiana Music Hall of Fame.

John Moore was interviewed by The HistoryMakers on June 11, 2010.

See how John "Deacon" Moore is related to other HistoryMakers
Click Here To Explore The Archive Today!