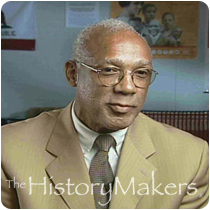 See how John Carlos is related to other HistoryMakers
Donate Now

John Carlos was born in 1945 in Harlem, New York. Carlos attended Machine Trade and Medical High School, where he was a talented track star. He received a full scholarship to East Texas State University (ETSU), and became that school’s first track and field Lone Star Conference Champion. After only one year at ETSU, Carlos was accepted at San Jose State University. Under the tutelage of Lloyd “Bud” Winter, a notable coach who would eventually be inducted into the National Track & Field Hall of Fame, Carlos began to thrive as an athlete.

While attending San Jose State University, Carlos met sociologist Harry Edwards, and under Edward’s influence helped to co-found the Olympic Project for Human Rights (OPHR). Edwards wanted to boycott the 1968 Olympic Games in Mexico City as a protest of the United States’ inability to deal with its human rights injustices. Despite the support of Carlos, Carlos’ newfound friend and fellow athlete Tommie Smith and a variety of civil rights leaders, the boycott never occurred. However, Carlos remained impressed by Edward’s ideas. His athletic career, meanwhile, had taken off – in the 1967 Pan-American games, Carlos was a bronze medalist for the 200 meter event.

At the time of the trials for the 1968 Olympic Games, Carlos beat Smith’s world record time for the 200 meter dash by 0.3 seconds, although a technicality kept the score from being officially recorded. During the actual 200 meter event, Carlos finished third, behind Smith and Australian Peter Norman. While receiving their medals, Smith and Carlos raised their gloved fists as a silent protest of racism and economic depression among oppressed people in America. In response, International Olympic Committee president Avery Brundage banned the two men from the Olympic Village and forced them from the United States Olympic team. After their return to the United States, both men received death threats. However, they had become a significant symbol of the Civil Rights struggle. Carlos also saw Martin Luther King, Jr. just ten days before King’s assassination.

Carlos continued to compete and excel in the field of track, and 1969 proved to be a year of great accomplishment. He tied the 100-yard dash record that year with a time of 9.1 seconds and led San Jose State to the NCAA championship for the first time, thanks to his winnings in the 100, 220 and 4x100-yard relay events. After his track career ended, Carlos joined the NFL’s Philadelphia Eagles, where an unfortunate knee injury cut his professional football career short after only one year. He continued to play football in Canada for the CFL, with one season as a player for the Montreal Alouettes and one year with the Toronto Argonauts. In 1985, Carlos became a counselor for Palm Springs High School in California. In 1998, both Smith and Carlos were honored in a ceremony to commemorate their protest at the 1968 Olympic Games, and the two reunited again at the funeral for Australian runner Peter Norman’s funeral ceremony in 2006.

John Carlos was interviewed by The HistoryMakers on March 29, 2006.

See how John Carlos is related to other HistoryMakers
Donate Now
Click Here To Explore The Archive Today!