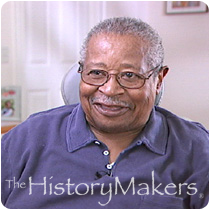 See how John Bynoe is related to other HistoryMakers
Donate Now

John Garvey Bynoe, born in Boston, Massachusetts, on October 25, 1926, had a distinguished career in the federal government and as a civic and community leader that spanned more than three decades. His parents, Edna V. Bynoe and John Leo Bynoe, immigrated from Barbados, in the British West Indies, in the mid-1890s. Growing up in Boston, Bynoe attended public schools, and after high school, he attended Boston University and the New England School of Law, where he received a bachelor’s of law degree in 1957.

As a veteran of World War II, Bynoe was one of the youngest veterans to lead a Veterans of Foreign War Post when he was elected commander of Post 953 in Boston in 1947. He also served as chairman of the Veterans Committee of the Boston Branch of the NAACP. Following his military service, Bynoe became an employee of the federal government in 1948, starting as a supply clerk in the regional office of the Federal Security Agency in Boston, which later became the United States Department of Health, Education and Welfare (HEW).

In the early 1950s, Bynoe became a claims representative in the Social Security Administration district office in Cambridge, Massachusetts. He remained in that post until 1954, when he was promoted from the position of field representative to assistant district manager in Salem. The following year, he became manager of the Social Security Administration district office in Norwood, Massachusetts. In July of 1966, Bynoe returned to the HEW regional office and assumed the position of program coordinator for civil rights on the staff of the HEW regional director. The following year, the Regional Office for Civil Rights was established, and Bynoe was named director, a position he held until his retirement in 1982. Under his tenure, the largest number of Blacks, Asians and Hispanics ever to enter federal service in New England did so with his guidance and training.

Throughout his career, Bynoe was active in many social and civic organizations. He was a founder and director of Boston’s first Black-owned bank, Unity Bank and Trust. He also served on the board of directors for the Boston branch of the NAACP, the Boston Legal Aid Society, the United Way of Massachusetts Bay, the Museum of the National Center of Afro-American Artists and the Massachusetts Pre-Engineering program. Between 1979 and 1982, Bynoe also served as the chairman of the Urban League of Eastern Massachusetts.

Between 1969 and 1989, Bynoe owned and operated the Professional and Business Men’s Club. The P&B Club served as a vital community site for community meetings, forums and social and professional networking for Boston’s black men and women of all classes and backgrounds. Bynoe and his wife, Louise, had two children, James and Jonathan. He had a son, John, Jr., and a daughter, Sandra, from a previous marriage.

See how John Bynoe is related to other HistoryMakers
Donate Now
Click Here To Explore The Archive Today!