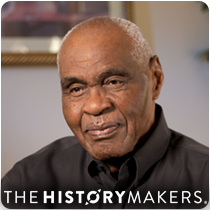 Football player John B. Wooten was born on December 5, 1936 in Riverview, Texas to Elmo Wooten and Henrietta Young. As a child, Wooten moved with his mother and siblings to Carlsbad, New Mexico. He graduated from Carlsbad High School in Carlsbad, New Mexico, and received his B.S. degree in education from the University of Colorado at Boulder in Boulder, Colorado in 1959. There, he became the second African American varsity football player in the university’s history, and as a senior, Wooten earned American Football Coaches Association All-America honors and was selected to play in the Chicago College All-Star Game.

After graduation, Wooten was selected in the fifth round in the 1959 National Football League Draft (NFL) as a defensive lineman by the Cleveland Browns. He played a total of 136 games for the Browns, and helped lead the team to their 1964 NFL Championship win against the Baltimore Colts. After nine seasons with the Cleveland Browns, Wooten played a single season with the Washington Redskins before he retired from professional football. In 1975, he became the director of professional scouting for the Dallas Cowboys, where he worked to make higher level coaching and staffing opportunities more equitable and accessible to African Americans. Wooten then joined the Philadelphia Eagles in 1992 as vice president of player personnel. He resigned from the Eagles organization and was hired by the Baltimore Ravens in 1998 as the team’s assistant director of pro and college scouting. Wooten was then appointed as chairman of the Fritz Pollard Alliance in 2003, where he worked to prevent racial discrimination in the NFL’s coach and personnel hiring processes. He also used his position as chairman of the Alliance to encourage harsher penalties and stricter guidelines against the use of offensive language on the field. As of 2017, Wooten was the president of Wooten Printing in Coppell, Texas.

Wooten was awarded and honored numerous times for his successful football career. He was named as the NFL’s Most Valuable Player in 1965; and, in 1979, was named as part of the Cleveland Browns All-Time All-Star Team. Wooten was also selected as a member of the University of Colorado’s All-Century Team. In 2010, he was inducted into the Cleveland Browns Ring of Honor, as well as the Browns’ Legends Program. Wooten was inducted into the College Football Hall of Fame in 2012.

John B. Wooten was interviewed by The HistoryMakers on September 13, 2017.