Information about John B. Clemmons, Sr. 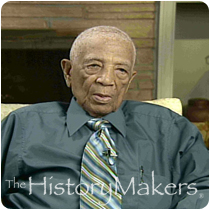 See how John B. Clemmons, Sr. is related to other HistoryMakers
Donate Now

College professor and scholar J.B. Clemmons was born John Benjamin Clemmons on April 11, 1912 to Lewis and Bessie Clemmons in Rome, Georgia. Clemmons graduated from high school in 1927 after completing only the tenth grade; African Americans were not allowed to go to eleventh or twelfth grade in Rome. In 1930, he entered Morehouse College in Atlanta, Georgia.

Clemmons then enrolled in graduate studies at Atlanta University, obtaining his M.A. degree in 1937. He then moved to Harlan, Kentucky, where he began teaching for $100 a week and met and married Mozelle Daily. By 1942, Clemmons was the principal of the school in Harlan. In 1947, Clemmons and his wife moved to Savannah, Georgia. While his wife began her lifelong involvement in the NAACP, Clemmons taught at Savannah State College (now Savannah State University) alongside his colleague, Dr. Henry M. Collier, Jr. Together, they formed the Delta ETA Chapter of Alpha Phi Alpha Fraternity, Inc. In the summer of 1949, he worked as a visiting professor at the University of Pittsburgh.

Clemmons then decided to continue his education by attending the University of Southern California to earn his Ph.D. He received Ford Foundation and National Science Foundation grants in 1951 and 1952, respectively. After working towards earning his Ph.D. at UCLA, Clemmons decided to return to Georgia, continued his teaching career and became involved in banking. He went on to charter the Alpha Lambda Boulé of the Sigma Pi Phi in Savannah in 1963.

See how John B. Clemmons, Sr. is related to other HistoryMakers
Donate Now
Click Here To Explore The Archive Today!