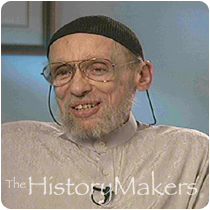 Composer, arranger, organist, choral conductor, jazz musician and music educator, John Andrew Ross was born in Boston, Massachusetts, on December 15, 1940, to Olga Evelyn White and Melvin Everard Ross, a close friend of Langston Hughes. Ross knew Langston Hughes as “Uncle Langston” while growing up in Roxbury. Ross attended public schools, and in 1957, he enrolled in Boston University to study church music. He received degrees from the College of Liberal Arts in 1960 and the School of Fine and Applied Arts in 1964.

Beginning in 1970 as music director at the Elma Lewis School of Fine Arts (ELSFA), Ross has worked with the ELSFA and its parent organization, the National Center of Afro-American Artists (NCAAA) and leads two music ensembles, the Voices of Black Persuasion and the Contra-Band. Ross has also served each Christmas season since 1970 as the musical director of the gospel play Black Nativity by Langston Hughes, which recasts the story of the birth of Jesus against a backdrop of African American culture.

In addition, Ross served the congregation of the First Parish Church in Brookline, Massachusetts, as minister of music. For nine years prior to his 1995 ordination, he was the church’s music director. Active as a member of the American Guild of Organists and also as an arranger, Ross released the recording, Comin' up Shouting: Gospel Songs and Spirituals Newly Arranged. Together with folklorist John Langstaff, Ross arranged the music that accompanies two books, Climbing Jacob's Ladder: Heroes of the Bible in African-American Spirituals and What a Morning: The Christmas Story in Black Spiritual.