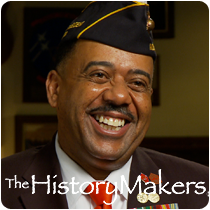 See how Joe Geeter, III is related to other HistoryMakers
Donate Now

U.S. Marine Corps Master Gunnery Sergeant Joseph H. Geeter was born in Chicago, Illinois. He earned his B.S. degree in management from Park College. In January 1976, Geeter enlisted in the U.S. Marine Corps and underwent training at the Marine Corps Recruit Depot and Basic Logistics School where he graduated as a class honor graduate.

During his first enlistment, Geeter served in all three active Marine Divisions and earned meritorious promotion to Corporal in 1978. In 1981, Geeter was assigned to the Marine Corps Air Station (MCAS) in Beaufort, South Carolina where he served in logistics and participated in the NATO exercise Ocean Venture in 1982. He soon transferred to Okinawa, Japan and became the Assistant Group Logistics Chief and Platoon Sergeant, Headquarters and Service Company of the 3rd Force Service Support Group (FSSG). He was then reassigned in 1984 to MCAS, Beaufort and served as the Logistics Chief of Marine Air Control Squadron Five where he coordinated and participated in several field exercises. In 1991, Geeter was deployed to the Republic of the Philippines and served as the Operations Chief and Detachment Gunnery Sergeant for Combat Service Support Detachment-35 in support of MAGTF 4-90. He soon transferred to Okinawa and served as the Logistics Chief of the Tactical Exercise Control Group in the 3rd Surveillance Reconnaissance and Intelligence Group, III MEF. During this tour, Geeter participated in Cobra Gold ‘95 in the Kingdom of Thailand.

In 1998, Geeter received a Special President's Award from the National President of the Montford Point Marine Association for his work with the Beaufort Chapter, and the James Calendar Award in 1999 for his continued efforts on a national level for the Montford Point Marine Association. He was honored with the prestigious NAACP Roy Wilkins Renown Service Award for his significant contributions to the Marine Corps in the area of equal opportunity and community involvement. Geeter’s military honors include the Meritorious Service Medal, the Navy/Marine Corps Commendation Medal, the Navy/Marine Corps Achievement Medal, the Marine Corps Good Conduct Medal and the Military Outstanding Volunteer Service Medal.

See how Joe Geeter, III is related to other HistoryMakers
Donate Now
Click Here To Explore The Archive Today!