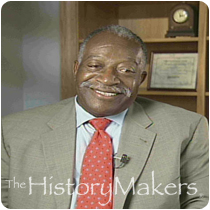 See how Joe Dickson is related to other HistoryMakers
Donate Now

Joe Dickson was born on March 5, 1933, in Montgomery, Alabama, to Mary Rachael and Robert Dickson. Dickson was raised by his widowed mother and his aunt Gertrude; he attended a Catholic elementary school before the family moved to the projects in Birmingham in 1939. Dickson graduated from Fairfield Industrial High School in 1950, and worked as a welder until he entered the United States Army.

Dickson then enrolled in Miles College from which he received his B.A. degree in sociology. While at Miles College, Dickson was involved in the civil rights marches and selective buying campaigns; he was arrested along with Rev. Fred L. Shuttlesworth and other civil rights activists in front of the federal court house in Birmingham. In the 1960s, Dickson joined A.G. Gaston’s Washington Insurance Company as an insurance agent, working in six different counties. Dickson also worked with the Urban League and acted as the deputy director for an experimental demonstration project at Miles College that trained African Americans for jobs within the community.

In 1970, Dickson attended Howard University Law School from which he earned his J.D. degree in 1973. Dickson then returned to Alabama and formed his own real estate and construction company. Dickson was the President of the Alabama Republican Council for a number of years and was asked to work for the former governor of Alabama, Guy Hunt, as the Assistant of Minority Affairs in 1988. Dickson began working with the Birmingham World newspaper in 1987 and in 1989 returned to run the paper. Dickson married Dr. Charlie Mae Dickson; together they had eight adult children.

See how Joe Dickson is related to other HistoryMakers
Donate Now
Click Here To Explore The Archive Today!