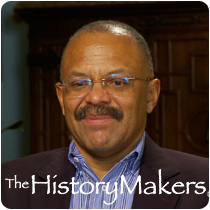 See how Joe Davidson is related to other HistoryMakers

Newspaper columnist Joe Davidson was born in Detroit, Michigan in 1949. He graduated from Mumford High School in 1967. In 1971, Davidson received his B.A. degree in education and political science from Oakland University in Rochester, Michigan. He received his M.P.P. degree in public policy from the University of Michigan, Ann Arbor in 1974.

Davidson’s professional career began in 1971 at the Detroit News. He moved to Philadelphia, Pennsylvania in 1974, and joined the Philadelphia Bulletin, where he became City Hall bureau chief. Davidson later served as City Hall reporter for the Philadelphia Inquirer, and managing editor for the National Leader. In 1984, Davidson moved to Washington, D.C., to work for The Wall Street Journal. During his tenure at The Wall Street Journal, Davidson covered a broad range of domestic issues and agencies, including the U.S. Justice Department as well as national politics. He was also based in Johannesburg, South Africa, where he served as a news correspondent during the aftermath of Nelson Mandela’s release from prison and subsequent election as the president of South Africa. After serving as a consulting editor for the Rev. Jesse Jackson’s Rainbow/Push organization and as an editor at the Joint Center for Political and Economic Studies, Davidson joined The Washington Post in 2005. Davidson has also appeared as a commentator or contributor to PBS’s “Religion & Ethics Weekly,” National Public Radio, BET, MSNBC, and Emerge Magazine.

Davidson is a founding board member of the National Association of Black Journalists (NABJ) and is past-president of the Philadelphia Association of Black Journalists (PABJ). He is also the recipient of numerous journalism awards, including the Founder’s Medal from the NABJ, the Alfred G. Wilson Outstanding Male Graduate Award from Oakland University, a First Place NABJ Award for International Reporting, and a First Place Award for reporting from Lincoln University in Jefferson City, Missouri.

Davidson lives in Washington, D.C. with his wife, Bernardine Watson. They have three sons: Hakimu and Jasiri Davidson and Robert Watson, as well as a granddaughter, Naomi Grace Sebelko-Watson.

Joe Davidson was interviewed by The HistoryMakers on January 18, 2013.

See how Joe Davidson is related to other HistoryMakers
Click Here To Explore The Archive Today!