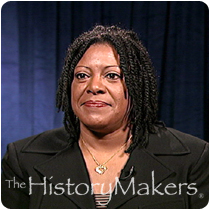 See how Jocelyn Dorsey is related to other HistoryMakers
Donate Now

Journalist Jocelyn Dorsey was born October 10, 1950, in Boston Massachusetts. She is one of three children born to Helena and Robert S. Dorsey in Cincinnati, Ohio. As a child, she attended Rockdale Elementary School and Walnut Hills High School, both in Cincinnati. Upon graduation from high school, she attended Ohio State University where she majored in journalism.

After completing college, Dorsey took a brief summer job as a photographer and reporter at The Cincinnati Herald for a summer. She then made her move to television in 1972, working as a reporter at WKRC- TV for a year before she found her permanent home at WSB-TV in Atlanta in 1973. Over the last thirty years, she has held a number of positions with the station, and since 1983, she has been director of editorials and public affairs. Before that, Dorsey served as an anchor, reporter, producer and assignment editor for Channel 2 Action News for ten years. Her current responsibilities at WSB-TV include research, writing and production of editorials broadcast by WSB-TV vice president and general manager Gregory Stone.

Dorsey is also executive producer and host of "People 2 People." She has won numerous awards for her work with WSB-TV, including seven Southeast Regional Emmys for Editorial Excellence from the National Academy of Television Arts and Sciences. She was the first African American inducted into the NATAS Silver Circle. She was also the first woman and first African American to receive the Georgia Association of Broadcasters Citizen of the Year Award. Dorsey has been inducted into the National Association of Black Journalists Region IV Hall of Fame and has been named National Media Woman of the Year by the National Association of Media Women. Her other honors include the first Georgia Chapter United Cerebral Palsy Woman of the Year and the YWCA Academy of Women Achievers. She was named a Pioneer Black Journalist, the highest award given by the Atlanta Association of Black Journalists. She was also recently recognized by Atlanta magazine as a "Woman Making Her Mark."

Dorsey is the mother of two children, one of whom was killed in January of 2003. She is also has two grandchildren.

See how Jocelyn Dorsey is related to other HistoryMakers
Donate Now
Click Here To Explore The Archive Today!