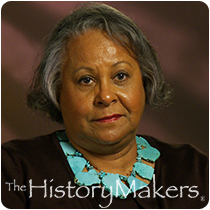 See how Joan Small is related to other HistoryMakers
Donate Now

Commissioner Joan F. Small was born on September 12, 1941 in Chicago, Illinois. She attended the University of Illinois in Champaign-Urbana for three years before transferring to Roosevelt University where she received her B.A. degree in psychology and social work in 1964.

Small was employed by the Cook County Department of Public Aid in 1964 as a caseworker where she worked in public housing at the Robert Taylor Homes. In 1969, Small became a member of the administrative staff of Metropolitan Family Services (originally the United Charities of Chicago). Small played a key role in the expansion and implementation of Metropolitan Family Services’ development program. She was hired by the City of Chicago in 1987 as the director of development for the Chicago Department of Cultural Affairs. In that role, she organized and implemented various fund-raising campaigns. She also developed marketing strategies and established sponsorships with corporate partners and local cultural institutions and arts agencies. In 1988, Small was appointed as the First Deputy Commissioner for the Chicago Department of Cultural Affairs by Mayor Richard M. Daley. Over the sixteen years she held that position, she managed the daily operations of the department. With a staff of 160 employees and an annual budget of $16.4 million, Small oversaw most program divisions and administrative activities, including grants, visual arts, performing arts, public art, cultural tourism, fundraising, the Chicago Sister Cities International Program and other international projects. Small developed and implemented programming, personnel procedures and oversight for the department’s seven non-profit entities. She also served as the department liaison to the mayor’s office for key governmental functions and legislative issues.

Small has been active in various local and national non-profit organizations. These include serving as a director of Americans for the Arts for twelve years and chair of the Leadership Advisory Committee of The Art Institute of Chicago. Small also served as a member for Know Your Chicago, the Chicago Chapter of The Links Inc, Chicago Chapter, National Smart Set, and The Friday Club. Previous board affiliations include the Alliance Franchise of Chicago; the Chicago Chapter of the National Conference of Community and Justice (formally National Conference of Christians and Jews); the women’s board of The Goodman Theatre; the International Visitors Center of Chicago; the Advisory Board of the Chicago Symphony Orchestra; and the Women’s Board, Metropolitan Family Services.

Commissioner Joan F. Small was interviewed by The HistoryMakers on August 21, 2013.

See how Joan Small is related to other HistoryMakers
Donate Now
Click Here To Explore The Archive Today!