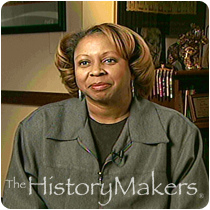 See how Joan M. Prince is related to other HistoryMakers

Hematologist Joan Marie Prince was born on January 14, 1954 in Milwaukee, Wisconsin and grew up in the neighborhood around 12th and Center Streets. Prince attended Wisconsin Lutheran School, graduating in 1971. She became a student at the University of Wisconsin-Milwaukee.

In 1977 and 1981 respectively, Prince earned her B.A. and B.S. degrees from the University of Wisconsin-Milwaukee. She was the first African American to finish the school’s medical technology program and its clinical laboratory master’s program in 1992.

Prince joined St. Joseph’s Hospital, becoming a hematologist. In 1981, Prince became an associate member of the American Society of Clinical Pathologists, and the following year joined the Group Cancer and the Black Community. In 1983, she became a member of the Black Women’s Health Project, and joined the McDonalds House speakers’ bureau in 1984 and the American Cancer Society’s board of directors one year later.

In 1988, Prince became the supervisor in hematology for the Medical Science Labs, and in 1989, the Milwaukee Public Library named her a black role model. She also began working for the University of Wisconsin’s medical school around this time, to implement the Health Professions Partnerships Initiative collaborative project as lead strategist. Prince also worked for Covenant Health Care Systems as a clinical laboratory supervisor.

Prince was interviewed by The HistoryMakers on November 28, 2007.

See how Joan M. Prince is related to other HistoryMakers
Click Here To Explore The Archive Today!