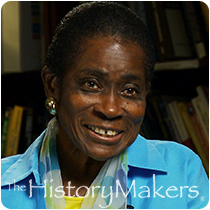 See how Joan Langdon is related to other HistoryMakers

Langdon began her career in higher education as an instructor at Rappahannock Community College in 1977. From 1979 to 1985, she was appointed instructor/lecturer at Hampton University where she also served as the first director of the Mathematics/Science Laboratory. After completing her doctorate at American University in 1989, Langdon joined the Bowie State University community as an Associate Professor in 1989. During her tenure at Bowie State University, she has served in several administrative positions, including as Director of the Summer Institute in Engineering and Computer Applications Program; Coordinator of the Computer Science program in the Department of Natural Sciences, Mathematics, and Computer Science; and, as the Faculty Administrative Intern. In 1994, she initiated the Senior Year Progression and Transition Program (SYPAT) and served as coordinator of the program. While there, Langdon served as Founding Dean of the College of Arts and Sciences. In 2006, she was appointed as Director of the Title III Program and Director of the Office of Research and Sponsored Programs.

Langdon has also served as chair and/or as a member of numerous committees at Bowie State University and in the University System of Maryland. She was appointed as a curriculum, proposal, and paper reviewer for the Maryland State Department of Education, the National Science Foundation, and the Association of Computing Machinery (ACM), respectively. In 1996, she was appointed to the ACM National Program Committee for SIGCSE. In addition, she has made presentations at all levels of higher education, participated in numerous workshops and conferences, published in conference proceedings, and developed software programs. She has also served as the principal investigator or co-principal investigator for several grants and sub-contracts, and has authored technical reports.

In 1999, Langdon received the ROTC Army Achievement Medal. Bowie State University honored her with the Distinguished Faculty Award in 2003 and the Distinguished Services Award for Outstanding and Dedicated Leadership in 2012. In 2007, she was awarded the NASA Administration Diversity Enhancement Award.

Joan Sterling Langdon was interviewed by The HistoryMakers on June 22, 2013.

See how Joan Langdon is related to other HistoryMakers
Click Here To Explore The Archive Today!