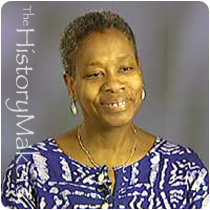 See how Joan Gray is related to other HistoryMakers
Donate Now

Dancer and arts administrator Joan Gray, was born on July 29, 1949, in Chicago, Illinois, one of eight children, including her twin sister, Judi. Gray attended Chicago public schools and, after earning her high school diploma in 1967, went on to North Central College in Naperville, Illinois. From 1979 to 1986, Gray worked as an administrative assistant at South Shore Bank.

From 1984 on, Gray was a member of the Muntu Dance Theatre in Chicago. Muntu, from the Bantu word for “the essence of humanity,” was founded in 1972 on the South Side of Chicago by a group of young artists looking for a means of expressing their African heritage. In 1973, the group was joined by choreographer and dancer Alyo Tolbert, who helped them rise to the professional level. Gray first heard of Muntu in 1977 from a drummer who was on his way to the theater; though she did not join until 1984, by 1987 she had become president of the troupe. Gray continued to dance with the theater until 1991.

The performances put on by Muntu included dances from various African countries, such as Senegal, Mali, and Ghana, as well as dances from the Caribbean and the United States. Their performances are known to bring viewers to their feet dancing, and because the troupe so thoroughly studies the significance of each dance, they teach about the culture as the performance takes place.

In addition to her work with Muntu, Gray was active as a board member of the International Association of Blacks in Dance for over a decade, and served on the African American Arts Alliance and the Chicago Dance Coalition.

In addition to her career in dance and arts administration, Gray raised two children.

See how Joan Gray is related to other HistoryMakers
Donate Now
Click Here To Explore The Archive Today!