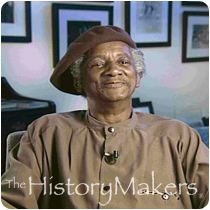 See how Jim Alexander is related to other HistoryMakers

Photographer Jim Alexander was born to contractor David Alexander and Frances James Alexander on August 7, 1935 in Waldwick, New Jersey. He attended Waldwick Public School and Ramsey High School. Joining the U.S. Navy in 1952, Alexander developed an interest in photography, apprenticing with the base photographer and selling photo portraits of other sailors for fifty cents each. Leaving the Navy in 1956, Alexander detailed cars, ran a pool hall and was route manager for a newspaper.

In 1964, Alexander moved to Ridgewood, New Jersey and started a career as a freelance photographer. He earned a certificate in business management from Rutgers University in 1967 and a degree in commercial photography from the New York Institute of Photography in 1968. That same year, Alexander began to document the local and national response to the assassination of Dr. Martin Luther King, Jr. Earning a reputation as a documentary photographer, Alexander was hired by Bruner Productions to shoot film strips from 1968 to 1970. In 1970, he was hired by Yale University’s School of Art and Architecture as a consultant for the Black Environmental Study Team. Alexander completed courses in communications psychology at the New School for Social Research in 1974. Accepting a position with the Atlanta Office of the Federation of Southern Cooperatives in 1976, Alexander went on to the Atlanta Neighborhood Arts Center in 1977 as photographer in residence. In 1982, he established the Photo/Media Photography Collective studio gallery complex in downtown Atlanta. He was appointed photographer in residence at Clark College in 1985. In 1988, his cultural interest led to the establishment of the First World Bookstores. In 1993, several of Alexander’s photographs were selected for “Beyond Category: The Musical Genius of Duke Ellington” exhibit that continues to tour. Alexander was also included in the city of Atlanta’s Masters Series in 1995 and in 2000; his jazz photos were featured in a solo exhibit with the National Black Arts Festival.

The recipient of a myriad awards, Alexander operates his own gallery/studio near the King Complex and is still a photographer, curator, lecturer and teacher. Having taught and mentored youth and adults at the Carlos Museum, Emory University, the Fulton County Arts Council, TRIO and Upward Bound Programs at Clark, Morris Brown and Atlanta Metropolitan Colleges, Alexander also maintains membership with Photomedia Associates, Inc., Media Arts for Youth, the International Association for Jazz Education, the African American Jazz Caucus and the Tupac Amaru Shakur Foundation.

See how Jim Alexander is related to other HistoryMakers
Click Here To Explore The Archive Today!