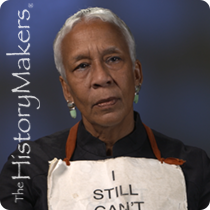 See how Jill Nelson is related to other HistoryMakers
Donate Now

Journalist and author Jill Nelson was born on June 14, 1952 in Harlem, New York to dentist Stanley Earl Nelson and librarian A'Lelia Nelson. Nelson attended Solebury School, a boarding high school in New Hope, Pennsylvania; and went on to earn her B.A. degree in English and African American studies from the City College of New York in 1977, and M.S. degree from Columbia University’s Graduate School of Journalism in 1980.

Nelson worked as a freelance journalist for various New York periodicals until 1986, when she accepted a staff position at the Washington Post and headed the new Sunday magazine. She left the Post in 1990 and pursued a career as a freelance writer once again. She wrote the screenplay for PBS-TV’s Mandela in 1985, and Two Dollars and a Dream in 1989. In addition, she authored the screenplay for the U.S. Department of Education’s Michael’s Journal in 1991. From 1998 to 2003, Nelson worked as a professor of journalism at the City College of New York.

She contributed to numerous publications throughout her career, including The New York Times, Essence, The Washington Post, The Nation, Ms., the Chicago Tribune, the Village Voice, USA Today, USA Weekend, and msnbc.com. Nelson also served as a lecture on many occasions and was a monthly contributor to the Op Ed page of USA Today. She also hosted numerous writing workshops. In 1993, Nelson published her best-selling memoir, Volunteer Slavery: My Authentic Negro Experience, which won an American Book Award. She also authored Straight, No Chaser: How I Became A Grown-Up Black Woman, which was published in 1997, Finding Martha’s Vineyard: African Americans at Home on an Island, published in 2005, and the novels Sexual Healing and Let’s Get It On, which were published in 2003 and 2009, respectively. Nelson also edited Police Brutality: An Anthology, which was published in 2000. She was named the Washington, D.C. Journalist of the Year at The Washington Post in honor of her contributions to journalism.

Nelson and her husband, Flores Alexander Forbes, have a daughter and two grandsons.

Jill Nelson was interviewed by The HistoryMakers on November 11, 2016.

See how Jill Nelson is related to other HistoryMakers
Donate Now
Click Here To Explore The Archive Today!