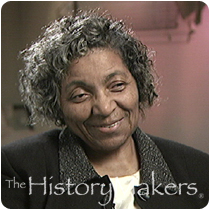 See how Jessie Gladden is related to other HistoryMakers

Jessie Benjamin Gladden was born on December 11, 1930 in New York City. Her mother was a domestic and later a business owner and her father was a laborer. During her adolescent years, Gladden’s mother moved the family back to her native North Carolina where she operated a restaurant and a store. In 1948, Gladden earned her high school diploma from North Hampton County Training School in North Carolina. In 1953, she earned her bachelor’s of science degree in social science and English.

Gladden began her teaching career in 1956 at Charles Hamilton Houston elementary school in Baltimore, where she taught for the next five years. After taking time off to raise her family, Gladden returned to the classroom in 1969, teaching at Pimlico Middle School until 1971. From 1973 until 1974, Gladden traded in her chalk and eraser for a camera and studio audience when she taught for the show Newslab that aired on Maryland Public Television. In 1973, she earned her master’s degree in American history from Morgan State University.

Gladden’s master’s thesis highlighted the medical accomplishments of Morgan State University medical scientist, Vivien Thomas. Thomas, with only a high school education, developed many surgical techniques and instruments used in treating and identifying diseases. Gladden’s thesis was titled, Vivien Thomas: Black Non-Doctor. From 1977 until 1997, she worked as a supervisor for Baltimore City Schools social studies curriculum. She retired from the Baltimore City School system in 1992. The following year, she took a position as a teacher supervisor at Johns Hopkins University until her retirement in 2001.

Gladden was married to Elzee Gladden, a Baltimore City educator who served as principal of Baltimore’s Dunbar High School and was the first person to receive a doctorate degree from Morgan State University.

See how Jessie Gladden is related to other HistoryMakers
Click Here To Explore The Archive Today!