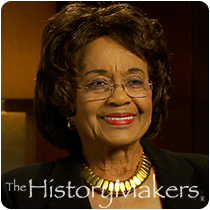 Librarian, author and educator Jessie Carney Smith was born on September 24, 1930 in Greensboro, North Carolina to James Ampler and Vesona Bigelow Carney. Smith attended Mount Zion Elementary School and James B. Dudley High School in Greensboro. She graduated from North Carolina A&T State University with her B.S. degree in home economics in 1950. Smith pursued graduate studies at Cornell University and then received her M.A. degree in child development from Michigan State University in 1956, and her M.A.L.S. degree from the George Peabody College of Vanderbilt University in 1957.

Smith served as consultant to the U.S. Office for Civil Rights, the U.S. Office of Education, the National Endowment for the Humanities (NEH), the Southern Association of Colleges and Schools (SACS), and the American Library Association. She directed three institutional self-studies at Fisk University, resulting in the institution’s reaffirmation of accreditation by SACS. In addition, Smith has directed multiple projects funded by NEH and the Andrew Mellon Foundation, and served on several Fisk University campus committees.

Smith has published numerous research guides and reference books. In 1991, she released the award winning, Notable Black American Women, and went on to publish Notable African American Men in 1999. Her other books include Black Heroes of the Twentieth Century, Freedom Facts and Firsts: 400 Years of the African American Civil Rights Experience, and Black Firsts: 4000 Groundbreaking and Pioneering Historical Events, among others.

Smith received the Martin Luther King Black Authors Award in 1982 and the National Women's Book Association Award in 1992. She received the Candace Award for excellence in education, Sage magazine's Ann J. Cooper Award, and distinguished alumni awards from both the Peabody College of Vanderbilt University and the University of Illinois. She was named the Academic/Research Librarian of the Year from the Association of College and Research Libraries in 1985; and, in 1997, received the key to the city of Oak Ridge, Tennessee. In 2011, Smith was awarded the Global Heritage Award from the Global Education Center and the Outstanding Achievement in Higher Education Award from the Greater Nashville Alliance of Black School Educators.

Jessie Carney Smith was interviewed by The HistoryMakers on April 22, 2014.