Information about Jessica B. Harris 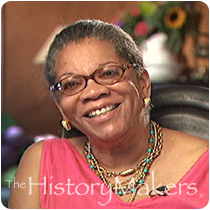 See how Jessica B. Harris is related to other HistoryMakers

Educator and culinary historian Jessica Harris was born in Queens, New York on March 18, 1948. Harris attended the United Nations International School from 1953 until 1961, and then went on to the High School of the Performing Arts, where she graduated in 1964. After high school, Harris attended Bryn Mawr College, earning her A.B. degree in French in 1968. While there, she spent her junior year abroad in Paris. She returned to France in 1968, attending the Universite de Nancy for a year, and then earned her master’s degree from Queens College in 1971. Harris earned her Ph.D. from New York University in 1983.

After returning from the Universite de Nancy, Harris began working as a lecturer in the department of romance languages at Queens College in 1969. She has remained there throughout her career, now working as an associate professor in the English department. Harris has also devoted her career to cuisine, writing on foods from around the world, often with a focus on African and Caribbean flavors. She has written several books, including The Welcome Table: African-American Heritage Cooking and Iron Pots and Wooden Spoons: Africa’s Gifts to New World Cooking. She has also contributed to numerous other books as well as written articles for Food & Wine and The New Yorker among others.

Harris has been honored numerous times for spreading the word of African and Caribbean cuisines around the world. Some of her awards include an appreciation award from Walt Disney World Epcot Center, the Heritage Award from the Black Culinarians, and the Food Hero award from Eating Well Magazine. She has also appeared on numerous televisions programs, including Good Morning America and The Today Show.

See how Jessica B. Harris is related to other HistoryMakers
Click Here To Explore The Archive Today!