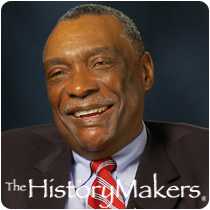 See how Jesse Russell, Sr. is related to other HistoryMakers
Donate Now

Inventor, electrical engineer, and business executive Jesse E. Russell, Sr. was born on April 26, 1948 in Nolensville, Tennessee to Mary Louise Russell and Charles Albert Russell. He was raised in inner-city Nashville along with his ten siblings. In 1972, Russell received his B.S. degree in electrical engineering from Tennessee State University. As a top honor student, Russell became the first African American to be hired directly from a Historically Black College and University (HBCU) by AT&T Bell Laboratories. The following year, he earned his M. S. degree in electrical engineering from Stanford University.

After the completion of his education, Russell continued to work at Bell Laboratories as a pioneer in the field of cellular and wireless communications. In 1988, Russell led the first team from Bell Laboratories to introduce digital cellular technology in the United States. He was a leader in communication technology in cellular devices and some of his patents include the “Base Station for Mobile Radio Telecommunications Systems,” (1992), the “Mobile Data Telephone,” (1993), and the “Wireless Communication Base Station” (1998). Russell held numerous posts while employed at AT&T, including director of the AT&T Cellular Telecommunication Laboratory and chief technical officer for the Network Wireless Systems Business Unit. From 1996 to 2000, Russell served as vice president of Advanced Communications Technologies for AT&T and Chief Wireless Architect for the AT&T Company. In 2000, Russell became the president and CEO of incNETWORKS®, Inc., a company devoted to developing fourth-generation broadband wireless communications devices and wireless voice, video and data communications equipment.

For his innovation and leadership, Russell has won a number of prestigious awards and he was invited to participate in numerous professional conferences and organizations. In 1980, he received the Outstanding Young Electrical and Computer Engineer Award from Eta Kappa Nuand. In 1992 he was named the U.S. Black Engineer of the Year for the best technical contributions in digital cellular and microcellular technology. Amongst other memberships, he is a fellow of the Institute of Electrical and Electronics Engineers, Inc. and a member of Eta Kappa Nu. In 1995, Russell was inducted in to the National Academy of Engineering. Russell is married to Amanda O. Russell, and they have raised four children: Tina, Jesse, Jr., William, and Catalina.

See how Jesse Russell, Sr. is related to other HistoryMakers
Donate Now
Click Here To Explore The Archive Today!