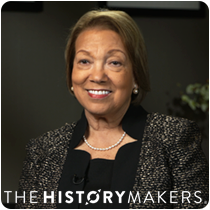 See how Jerry Sue Thornton is related to other HistoryMakers

College president Jerry Sue Thornton was born on January 16, 1947 in Hopkinsville, Kentucky, to Clarence and Dorothy Pritchett. She attended the J. W. Million Elementary School, and graduated from Earlington High School. Thornton received her B.A. degree in English and speech from Murray State College in 1969, and her M.A. degree in communications from Murray State University in 1970. She attended Northern Illinois University, and earned her Ph.D. degree in educational administration at The University of Texas at Austin in 1983. She attended Harvard University’s Institute for the Management of Lifelong Education in 1988.

Thornton taught at Earlington Junior High School, in Earlington, Kentucky in 1969; and at Murray High School, in Murray, Kentucky in 1970. The following year, she moved to River Grove, Illinois where she became an English faculty member at Triton College. She was promoted to assistant dean of arts and sciences at Triton College in 1978. In 1985, she became president of Lakewood Community College (now Century College) in White Bear Lake, Minnesota. Thornton moved to Cleveland, Ohio to serve as the first female president of Cuyahoga Community College in 1992. During her tenure, she led $300 million worth of renovation and construction projects, also increasing the college’s foundation from $1.3 million to $40 million. In June 2013, Thornton retired as president of Cuyahoga Community College and became president of Dream Catcher Education Consulting.

Thornton’s board service included membership on the board of Applied Industrial Technologies, Inc., National City Bank, Bridgestreet Worldwide, Inc., Republic Powdered Metals, Inc., American Family Insurance, FirstEnergy Corporation, Office Max, Barnes and Noble Education, Inc., and Parkwood Corporation; in addition to serving as co-chair of the 21st Century Commission on the Future of Community Colleges, on the board of visitors of the Marine Corps University, and on the Community College Advisory Board of Dynamic Campus, among others. Thornton’s numerous awards and honors include four honorary doctorates from the College of St. Catherine, Youngstown State University, Baldwin Wallace University, and Cleveland State University. She was inducted into the Ohio Women’s Hall of Fame, and was awarded the American Council on Education Fellows’ Mentor of the Year Award, the 2014 American Association of Community Colleges’ Community College Leadership Award, the Diverse Champions Award by Diverse: Issues in Higher Education, and the Dr. Martin Luther King Jr. 2014 Community Service Award for Outstanding Achievement. In 2013, Thornton was named one of the “Top 25 Women in Higher Education” by Diverse: Issues in Higher Education. In 2018, she received the City of Cleveland’s Heritage Award; and the Del deWendt Award from the First Tee of Cleveland.

Jerry Sue Thornton was interviewed by The HistoryMakers on September 27, 2018.

See how Jerry Sue Thornton is related to other HistoryMakers