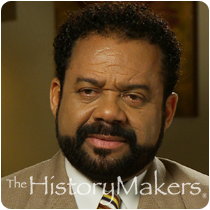 See how Jerry Revish is related to other HistoryMakers

Television news anchor Jerry Revish was born in Youngstown, Ohio on March 15, 1949 to Estelle Revish, a homemaker and Dewey Revish, a steelworker. He graduated from East High School in 1967 and went on to attend Youngstown State University and Chapman College in Orange, California.

In 1972, Revish began his career in the media when he joined WBBW-Radio in Youngstown, Ohio as a board operator. Two years later, he went on to work for WBNS-AM/FM Radio in Columbus, Ohio as a general assignment reporter and assignment editor. In 1980, Revish became a newscaster for WBNS-TV. He reported from Saudi Arabia on the Persian Gulf War in 1990 and his stories entitled, “Desert Shield Diary” won a Midwest Regional Emmy Award in 1991. Revish reported from Bosnia during the Balkans War and created an award-winning half-hour long documentary from his time reporting on post-apartheid South Africa. Since 1992, he has served as co-anchor for WBNS-TV and has anchored the 5 PM, 6 PM and 11 PM news. In 1996, Revish won the NABJ’s Best International Reporting Award for his story "A Return to Haiti: Rebuilding Paradise." Also in 1996, Revish was instrumental in exonerating Columbus bodybuilder Walter Smith, who was falsely accused of rape, by shining light on Smith’s story through the testing of DNA evidence never introduced at trial. He has also reported from Barbados, Bahrain and Japan. Revish is active in his local community and the founder of The Columbus Association of Black Journalists/Jerry Revish High School Journalism Workshop for minority students in Columbus, Ohio.

Revish has garnered much recognition for his work including six Emmy awards and seventeen Emmy nominations. He has also received the Associated Press awards for best feature, best documentary and best spot news coverage. Revish is the recipient of the Blue Chip Award in Communications and the Carl Day Award for Outstanding Achievement. He was inducted into the Ohio Broadcasters Hall of Fame in 2005 and has been a member of the National Association of Black Journalists since 1985. Revish and his wife have two adult children, Nicole and Jerome.

Jerry Revish was interviewed by The HistoryMakers on April 3, 2012.

See how Jerry Revish is related to other HistoryMakers
Click Here To Explore The Archive Today!