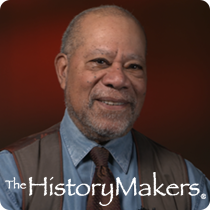 See how Jerry Pinkney is related to other HistoryMakers
Donate Now

Illustrator Jerry Pinkney was born on December 22, 1939 in Philadelphia, Pennsylvania to Willie Mae and James H. Pinkney. Pinkney began drawing when he was four years old and, though he was gifted with creating art, he struggled with undiagnosed dyslexia throughout his childhood, high school, and college years. In 1957, he graduated from Murrell Dobbins Vocational School in Philadelphia and received a full scholarship to attend Philadelphia College of Art. After two and a half years, Pinkney left college to marry and start a family with his wife, Gloria Jean.

Pinkney worked briefly as a flower delivery truck driver in Philadelphia before relocating to Boston, Massachusetts, where he joined the Rust Craft Greeting Card Company. In Boston, Pinkney also joined the Boston Action Group, and developed friendships with artists of color. In 1962, he began working for Barker-Black, a design and illustration studio. Pinkney illustrated his first children’s book, The Adventures of Spider: West African Folk Tales, by Joyce Cooper Arkhurst in 1964. In 1971, he opened Jerry Pinkney Studio in Croton-on-Hudson, New York. Pinkney illustrated over 100 books, including: Song of the Trees (1975) by Mildred D. Taylor, Mary McLeod Bethune (1977) by Eloise Greenfield, The Covenant (1980) by James A. Michener, The Talking Eggs (1989) by Robert D. San Souci, Back Home (1992) by Gloria Jean Pinkney, The Jungle Book (1995) by Rudyard Kipling, and Tales of Uncle Remus (1987), Sam and the Tigers (1996), Black Cowboy, Wild Horses (1998) and The Old African (2005) by Julius Lester.

Pinkney served in a number of educational capacities, including as associate professor of illustration at Pratt Institute in Brooklyn, New York from 1986 to 1988, as associate professor of art at University of Delaware in Newark, Delaware from 1988 to 1992 and as visiting professor at State University of New York-Buffalo in 1991. Between 2003 and 2009, Pinkney served on the National Council of the Arts. His work was featured in multiple group and solo exhibitions throughout the United States as well as in Japan, Italy, Russia, Taiwan and Jamaica. Pinkney also contributed to numerous Caldecott Honor books, and was the first African American recipient of the Caldecott Medal for his illustrative retelling of the Aesop’s fable The Lion & the Mouse in 2009.

Pinkney and his wife, Gloria Jean, have four children.

See how Jerry Pinkney is related to other HistoryMakers
Donate Now