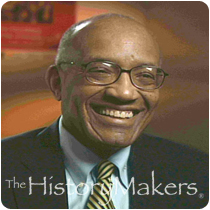 See how Jerry O. Williams is related to other HistoryMakers
Donate Now

Former Fortune 500 executive and entrepreneur Jerry O. Williams was born on September 27, 1938 in Indianapolis, Indiana to Margaret Nora Stone Williams and James Oliver Williams. His mother established the “Williams Scholarship Fund,” a family savings plan that made it possible for Williams and his siblings to attend college. Growing up on the Eastside of Indianapolis, Williams attended Francis W. Parker School No. 56 where he played trumpet in the band with Freddie Hubbard. Williams went to John Hope Franklin Middle School and graduated from Crispus Attucks High School in 1956. His classmates included basketball great Oscar Robertson, and he was taught by musicologist David Baker. Entering Indiana’s DePauw University, where his fellow black classmates were artist, Willis “Bing” Davis and future civil rights lawyer Vernon E. Jordan, Jr. Enrolling his last two years at Purdue University, Williams graduated with an undergraduate degree in math from DePauw University and a degree in electrical engineering from Purdue University in 1961. Entering General Electric’s (GE) Engineering and Science Training Program, Williams finished in 1964. While working for GE, Williams earned his M.S.E. degree in operations research and systems engineering from the University of Pennsylvania in 1967.

Williams worked for Stanford Research Institute in Palo Alto, California in 1968, and by 1973 returned to GE and was mentored by Lou Tomasetti. In 1975, Williams left GE to become vice president of $400-million auto supplier, Maremont, in Chicago where he was befriended by president Richard Black. When Maremont was sold to Zurich-based Alusuisse, Ltd., Williams returned to GE. In 1981, he rejoined Black at AM International, as vice president of corporate planning and development. In 1982, Williams was appointed president of the Bruning Division of AM International, and by 1985, he became president and chief operating officer of the parent company, AM International. Acquiring Harris Graphics in 1986, Williams helped double AM sales. By 1988, AM was doing $1.5 billion in business. Williams became the first African American to grace the cover of Fortune magazine as AM’s future CEO and the nation’s first black president of a Fortune 500 company. However, Williams resigned from AM in 1988 and by 1990 moved to the United Kingdom as chairman of the board and managing director of Monotype Corporation, PLC. In 1993, Williams founded Grand Eagle Companies in Chicago and served as president and chief executive officer of this $215 million company – the largest independent manufacturer and repairer of electric motors and transformers in North America. In 2000, he sold the company to a private equity group and retired.

Williams lives in the suburbs of Chicago with his wife, Pamella Jones Williams. They have two grown children.

Williams was interviewed by The HistoryMakers on January 19, 2007.

See how Jerry O. Williams is related to other HistoryMakers
Donate Now
Click Here To Explore The Archive Today!