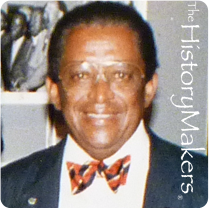 See how Jerry Fanion is related to other HistoryMakers
Donate Now

Civil rights activist and city government administrator Jerry Fanion was born in 1931 and raised by Jesse and Lucille Fanion in Memphis, Tennessee. Fanion graduated from Booker T. Washington High School and began working for the U. S. postal service. As the Civil Rights Movement reached a fever pitch in the South, the Shelby County Community Relations Commission was founded in order to attempt to relieve racial tensions within the Shelby County community. Fanion began serving as director of the commission in the early 1960s, where he worked as a liaison between the Memphis government and the community of Memphis.

During this time, Fanion also played a role in easing the lives of many Civil Rights Movement luminaries, including James Meredith and Dr. Martin Luther King Jr., by running errands for them and trying to make them more comfortable as they passed through the city. Fanion constantly worked to smooth tempers and ease relations between people throughout some of the tensest periods in Memphis.

Fanion was involved with the sanitation workers’ strike that took place in 1968, and worked to get the city government to recognize the sanitation workers’ union. He was present at King’s “ I’ve Been to the Mountaintop ” speech and was attacked by policemen during marches and arrested while leaving meetings on several occasions during the strike, in spite of his position in the city’s government. He was also a member of The Invaders, a militant African American political organization associated with the sanitation strikers, which eventually merged with the Black Panther Party in 1969.

After King’s assassination and the subsequent favorable settlement with the sanitation workers by the City of Memphis’ government, Fanion went to work as a salesman for the Chevrolet Corporation, where he remained for the next twenty-three years and received numerous awards for successful salesmanship. Fanion died on July 30, 2010 at age seventy-eight years old.

Jerry Fanion was interviewed by The HistoryMakers on July 26, 2010.

See how Jerry Fanion is related to other HistoryMakers
Donate Now