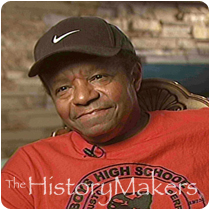 Singer Jerome “Little Anthony" Gourdine was born on January 8, 1941, to Victoria Stafford and Thomas Elliot Gourdine. He grew up in the Fort Greene Housing Project in Brooklyn, New York, and attended Boys High School. While in high school, Gourdine and his friends created a doo-wop group called, "The Duponts."

In 1957, Gourdine joined a new group called the, The Chesters, as the lead vocalist. The group recorded, “Tears on My Pillow,” which became an instant success. The Chesters, changed their name to Little Anthony & The Imperials, in 1959, and released their second hit single, “Shimmy, Shimmy, Ko-Ko-Bop,” which sold one million records.

Little Anthony & The Imperials performed their first reunion show in 1992, in New York City, New York. Over the years, they have had seventeen pop and twelve R&B chart hits.

Jerome "Little Anthony" Gourdine was interviewed by The HistoryMakers on April 6, 2007.

See how Jerome "Little Anthony" Gourdine is related to other HistoryMakers
Donate Now
Click Here To Explore The Archive Today!