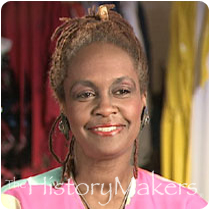 Fashion designer Jermikko Shoshanna Taliaferro Johnson was born in Chicago, Illinois. Her father, Albert Johnson, was an entrepreneur and her mother, Teary Watson-Johnson, was a textile weaver. Jermicko Johnson combined the talents of both parents by starting her own fashion design business.

Johnson graduated from DuSable High School in Chicago in 1966 and went on to earn a Bachelor of Fine Arts degree from the School of the Art Institute in 1972. The previous year, she served as an apprentice to fashion designer Stanley Korshak, and after graduating she went to work for Eucos, Inc. in Evanston, Illinois. Fureal Ltd., in neighboring Skokie, hired Johnson in 1973. The following year, she also began teaching at Chicago State University. Traveling to Fort Worth, Texas in 1975, Johnson became a fashion designer and coordinator for Pier 1 Imports. Two years later, Johnson returned to Chicago, creating clothing for Revere Sportswear. In 1979, she began designing apparel for HJ, Inc. That same year, she founded Jermikko Shoshanna Johnson Originals. In 1987, Johnson created yet another design firm, JJ Hobeau, Inc. Her successful businesses continue to thrive today. Johnson won the State of Illinois Fashion Designer of the Year Award in 1997 and was honored as the Manufacturer of the Millennium in 1999.

Johnson started the adult education fashion design programs at Olive-Harvey College and Chicago State University. She served as a faculty adviser at the Academy of Fashion and Merchandising in 1981 and at the Ray Vogue School of Fashion Design in 1982. Johnson not only taught adults for many years, but also worked with children through the Chicago Public School program "Each One, Reach One, Teach One." Her civic activities include involvement with the Girl Scouts of America, the Apparel Industry Board, the Chicago Fashion Guild, the Chicago Fashion Exchange and the League of Black Women.

Jermikko Shoshanna Johnson was interviewed by The HistoryMakers on July 26, 2002.

See how Jermikko Shoshannah Johnson is related to other HistoryMakers
Donate Now
Click Here To Explore The Archive Today!