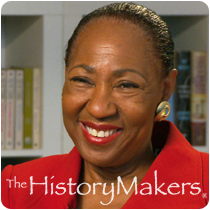 See how Jennifer Lawson is related to other HistoryMakers
Donate Now

Senior vice president, producer and general manager, Jennifer Karen Lawson was born on June 8, 1946 in Fairfield, Alabama. Her father Willie D. Lawson was the owner of a repair shop and her mother Velma Lawson, was a retired school teacher. She is the second of five children, Willie Dee, Frankie and James and Schuyler. Lawson attended Tuskegee University briefly before dropping out and dedicating her time to the civil rights movement. She has worked with the Student Nonviolent Coordination Committee (SNCC) and the National Council of Negro Women (NCNW) where she has worked on self-empowerment programs for rural women. She has also worked as deputy director for an adult education program in Mississippi’s Quitman County. Lawson eventually relocated to Washington, D.C. where she worked as art director for, Drum and Spear, a bookstore and publishing company. In 1970, Lawson moved to Dar es Salaam, Tanzania as coordinator of a joint publishing project, it was here that she decided to study film.

In 1974, Lawson graduated with her M.F.A degree from Columbia University in New York City. After graduation, Lawson worked as publicity director on a fundraising campaign for the United Church of Christ. She also worked as assistant editor for a small film company, William Greaves Productions. Lawson taught film at Brooklyn College for three years and worked as the executive director for the Film Fund, a grant making organization. In 1980, she worked as program fund coordinator for the Corporation for Public Broadcasting in Washington, D.C. and attended Harvard University for an executive management program. She later became director of the Television Program Fund at the Corporation for Public Broadcasting. In 1989, Lawson was hired by PBS as their first chief programming executive, making her the highest ranking black woman to have served in public television. During her time at PBS she was responsible for the scheduling and promotional strategies that resulted in PBS’ most successful series, Ken Burns’, “The Civil War” and “Baseball”. Lawson also developed children’s series, “Barney and Friends”, “Lamb Chop’s Play-Along”, and “Where in the World is Carmen Sandiego?”

In 1995, Lawson resigned from PBS and founded Magic Box Mediaworks. Her company produced the eight part series “Africa”, in partnership with National Geographic and WNET, which was aired on PBS in 2001. In 2004, Lawson was hired by WHUT-TV at Howard University as general manager and co-produced, “Security vs. Liberty: The Other War”, for a PBS series, “American at the Crossroads”. She has been named one of “101 Most Influential People in Entertainment Today,” Entertainment Weekly, and was named to the Power 50 List by, Hollywood Reporter. Among her other awards are ones from the International Film and Video Festival, a Gold Camera Award and Cine Golden Eagle, for episodes of the “Africa” series. Lawson is married to Anthony Gittens, an arts administrator and film festival director. They have two sons, together Kai and Zac Gittens.

Jennifer Lawson was interviewed by The HistoryMakers on May 1, 2012.

See how Jennifer Lawson is related to other HistoryMakers
Donate Now
Click Here To Explore The Archive Today!