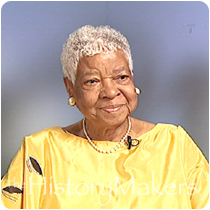 See how Jeni LeGon is related to other HistoryMakers
Donate Now

Dancer, actress, and dance instructor Jeni LeGon was born Jennie Ligon on August 14, 1916, in Chicago, Illinois. Later, in London, she learned that she was descended from General Henry Beauchamp Lygon, the 4th Earl of Beauchamp, through her father, Hector Ligon, a "Geechie" from the Georgia Sea Islands. LeGon grew up with her older sister Mary Belle in Chicago's overcrowded Black Belt. Practicing and performing with other children, LeGon received her first formal training from Mary Bruce's School of Dance. She often skipped school to learn new dance routines from the movies, and she graduated from Sexton Elementary School in 1928. In 1930, at age thirteen, she successfully auditioned for the Count Basie Orchestra's chorus line. Leaving Englewood High School a year later, LeGon was already a cutting edge professional dancer with a repertoire of knee drops, flips, slides, mule kicks, and flying splits, which she performed wearing pants.

In 1931, LeGon became a member of the family oriented Whitman Sisters troupe, which traveled the South. With her half sister, Willa Mae Lane, she formed the LeGon and Lane tap duo in 1933. In 1935 Hollywood, Earl Dancer, the former manager of Ethel Waters, discovered LeGon. Dancer helped LeGon to be the first black woman to sign an extended contract from MGM, though it was shortly cancelled. In her first screen role, LeGon danced with Bill "Bojangles" Robinson (the only black woman to do so on screen) in Hooray for Love, which also featured Fats Waller.

LeGon married composer Phil Moore in 1943 and they co wrote "The Sping" which Lena Horne sang in Panama Hattie. She also starred in Fats Waller's Broadway musical, Early to Bed and took African dance lessons from Katherine Dunham that same year. In 1953, LeGon appeared with Dorothy Dandridge and Harry Belafonte as a teacher in Bright Road. Her next U. S. film role would not come until Snoop Dogg's 2001 film, Bones. In the 1950's LeGon founded a school of dance and appeared in television's Amos and Andy. By the 60's she toured with Jazz Caribe. In 1969, LeGon settled in Vancouver, British Columbia teaching tap, point and Dunham technique. In the 1970s, LeGon worked with Troupe One, a youth theatre group and traveled to London with the Pelican Players in the 80s.

The Black Filmmakers Hall of Fame and the National Congress of Black Women have honored LeGon. In 2002, Oklahoma City University conferred upon her a doctorate of performing arts in American Dance. In 1999, the National Film Board of Canada released Grant Greshuk's prize-winning documentary, Jeni LeGon: Living in a Great Big Way.

See how Jeni LeGon is related to other HistoryMakers
Donate Now
Click Here To Explore The Archive Today!