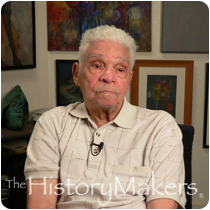 See how Jefferson Eugene Grigsby is related to other HistoryMakers

Art professor, fine artist, and high school art teacher Jefferson Eugene Grigsby, Jr. was born on October 17, 1918, in Greensboro, North Carolina, to Jefferson Eugene Grigsby, Sr. and Perry Lyon Dixon. Grigsby first discovered his love for art after his family moved to Winston-Salem, North Carolina, when he was nine years old. In 1933, Grigsby attended Johnson C. Smith University in Charlotte, North Carolina. Within a year, Grigsby transferred to Morehouse College in Atlanta, Georgia, where he first met his long time mentor, Hale Woodruff. Grigsby graduated from Morehouse College in 1938, with B.A. degree and because of Woodruff, he was equipped with extensive artistic experience that he would retain throughout his life. Grigsby went on to obtain his M.A. degree in art (1940) from Ohio State University and his Ph.D. degree from New York University (1963).


In 1942, Grigsby volunteered to serve in World War II and became a master sergeant of the 573rd Ordinance Ammunition Company under U.S. Army General George Patton during the Battle of the Bulge. In 1943, Grigsby married Rosalyn Thomasena Marshall, a high school biology teacher and social activist. Three years later, at the invitation of the school’s principal, W.A. Robinson, Grigsby began working at Carver High School as an art teacher. After the closing of the school in 1954, Grigsby began working at Phoenix Union High School where he remained until 1966.

In 1958, Grigsby was selected by the Museum of Modern Art in New York City to represent the United States as an art teacher at the Children’s Creative Center at the Brussels World Fair in Belgium. This experience inspired Grigsby to initiate a number of art programs in community centers, housing projects and day care centers in the Phoenix area.

Grigsby began teaching at the university level in 1966, working at the School of Art at Arizona State University until 1988. During this time, Grigsby published "Art and Ethics: Background for Teaching Youth in a Pluralistic Society," the first book ever written for art teachers by an African American artist and author.

In 2001, "The Art of Eugene Grigsby Jr.: A 65 Year Retrospective" was featured at the Phoenix Art Museum. The exhibition featured insightful commentary of Grigsby’s life and influence on the art and education world by his many colleagues, friends and family.

Grigsby served on the boards of numerous organizations, including the National Art Education Association, the Committee on Minority Concerns and Artists of the Black Community/Arizona. Grigsby has also been awarded numerous times for his outstanding work, including the Arizona Governor’s “Tostenrud” Art Award and the NAACP’s Man of the Year Award.

Grigsby lives with his wife in their Phoenix home. They have two sons, Jefferson Eugene Grigsby, III and Marshall Grigsby, who both have been recognized as educators.

Jefferson Eugene Grigsby, Jr. was interviewed by The HistoryMakers on July 11, 2007.

See how Jefferson Eugene Grigsby is related to other HistoryMakers
Click Here To Explore The Archive Today!