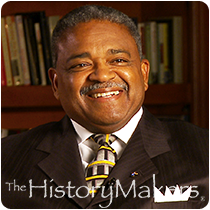 See how Jefferi Lee is related to other HistoryMakers

Television executive Jefferi Keith Lee was born on January 24, 1957 in South Boston, Virginia to General and Nannie Lee. He attended St. Joseph’s Catholic School and Robert E. Lee Elementary School, and then graduated from T.C. Williams High School in Alexandria, Virginia. Lee studied radio, television and film at Missouri Valley College and at the University of Maryland in College Park.

In 1979, after working as an intern at the CBS affiliate WDVM-TV in Washington, D.C., Lee was hired as a production assistant for Morning Break and Harambee. Subsequently, he joined the production staff of television's first weekly newsmagazine show, PM Magazine, and became the show's associate producer in 1981. Then, in 1982, Lee was hired as the network operations manager for Black Entertainment Television. He was promoted to executive vice president of network operations in 1992, which expanded his responsibilities to oversee the development of two new BET networks including BET On Jazz: The Cable Jazz Channel, and BET International. Lee left BET as executive vice president in 1998 and founded Lee Productions, a communications consulting firm. Then, from 2005 until 2008, he served as executive director and president of the Bio-Defense Research Group. Lee was named general manager of Howard University's PBS outlet, WHUT-TV, in 2011.

Lee has also been involved in various non-profit organizations where he served on the boards of Big Brothers/Big Sisters and Easter Seals, and as a member of the Georgia Tech Presidents Advisory Board. Lee was also an elder member of the Olive Branch’s Elder Board. He serves as the chief executive officer of the Brandon Carrington Lee Foundation with his wife, Tina Mance-Lee, who serves as chief operating officer. Lee has also lectured at Howard University and taught as a visiting professor at the University of Texas at Austin.

Lee and his wife live in Silver Spring, Maryland. They have two sons: Brandon Lee (deceased) and Jefferi Lee, a web developer.

Jefferi Lee was interviewed by The HistoryMakers on October 24, 2013.

See how Jefferi Lee is related to other HistoryMakers
Click Here To Explore The Archive Today!