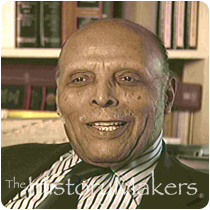 See how Jeff Greenup is related to other HistoryMakers

Jeff L. Greenup was born on March 24, 1919, on a farm in East Baton Rouge Parish, Louisiana. His family included some staunch civil rights activists, and Greenup was only thirteen when he and his father were arrested for objecting to a powerful Baton Rouge businessman when he refused to pay the agreed upon price for the delivery of produce from the Greenup farm. Greenup grew up in New Orleans where he was drafted into the U.S. Army. After spending four years, one month, twenty days, and nine hours in the army, including twenty-eight months in World War II combat in the China, Burma, and India Theater, Greenup moved to New York City where he attended Long Island University on the GI Bill of Rights and received his B.S. degree in 1948. In 1951, Greenup received his law degree from Brooklyn Law School and was admitted to the New York State Bar.

After graduation, Greenup formed the law firm of Mack, McFadden and Greenup. In 1963, Greenup’s eighty-two-year-old Aunt Charlotte was arrested in Clinton, Louisiana, for protesting the treatment of African Americans, and Greenup served as one of her lawyers. Around the same time, he organized what would be known as the "United Nations Law Firm" of Greenup, Schimmel, Golar & Levister, a firm that included four partners and fourteen associates of diverse ethnic makeup. Greenup worked primarily in the area of litigation, and many of his cases were pro bono. Greenup spent six weeks during the summer of 1964 in St. Augustine, Florida, defending Dr. Martin Luther King, Jr. and his followers. Over the years, he also represented the NAACP, CORE, and SNCC.

Greenup served as legal counsel to the Harlem Urban Development Corporation during its entire existence and was elected as president of the New York Branch of the NAACP, where he served six consecutive terms. He litigated several famous cases, including his representation of the family of Clifford Glover, a ten-year-old black youth killed by a New York City police officer, successfully winning a significant monetary reward from the City of New York. In 1984, Greenup would serve as one of the founding members of the Metropolitan Black Bar Association, an organization determined to advance equality, excellence and support minorities in the legal profession. Throughout the 1980s, Greenup traveled extensively. He was selected to travel to Russia to study the Russian legal system and was sent to South Africa to ensure the legitimacy of the nation’s first democratically-held election. The NAACP awarded Greenup a Valor Award in 1991. He also received the Wiley A. Branton Award from the National Bar Association and the Ming Advocacy Award from the New York City NAACP.

Greenup passed away on March 1, 2013 at the age of 93. He was the father of two daughters, Carolann and Melanie Theresa Greenup.

Jeff Greenup was interviewed by The HistoryMakers on April 5, 2007.

See how Jeff Greenup is related to other HistoryMakers
Click Here To Explore The Archive Today!