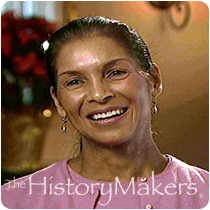 Photographer Jeanne Moutoussamy-Ashe was born on July 9, 1951 in Chicago, Illinois. Art has been a life-long pursuit for Moutoussamy-Ashe. Her mother, Elizabeth Moutousammy, an interior designer and father, John Moutoussamy, an architect, encouraged her artistic side. Taking advantage of the opportunities available to them in Chicago, she began her formal training at age eight when her parents enrolled her in classes at the Art Institute of Chicago. When it was time for undergraduate studies, Moutoussamy-Ashe moved east to New York and received a B.F.A. degree in photography from The Cooper Union School of Art. After graduating in 1975, she worked as a graphic artist and photojournalist for WNBC-TV. In October 1976, Moutoussamy-Ashe was hired to take photographs at the United Negro College Fund tennis event, where she met tennis great, Arthur Ashe. The two married on February 20, 1977.

Throughout her career, Moutoussamy-Ashe has had frequent group and solo exhibitions at museums and galleries around the world including the Leica Gallery, the Museum of Modern Art, the Whitney Museum of American Art and the Brooklyn Museum of Art in New York; the Smithsonian and the National Portrait Gallery in Washington, D.C.; Galerie Herve Odermat in Paris and The Excelsior in Florence among others. Publications such as Life Magazine, The New York Times, People and the Associated Press have also featured her photography, disseminating it to a wider audience. In 2001, she hosted the documentary Crucible of the Millennium, which PBS broadcast nationwide.

Moutoussamy-Ashe also taught photography courses at the high school and college levels and continues to lecture about this subject matter at many educational and cultural institutions. Outside of the field of photography, she has been actively engaged in philanthropic efforts involving social, health, and community-based issues. As an activist and civic leader, she has served as the director of the Arthur Ashe Endowment for the Defeat of AIDS, a former trustee of her alma mater, The Cooper Union, and a one-time Alternate Representative of the United States to the United Nations, a presidential appointment.

Her photographs contain strong narrative and documentary elements. Moutoussamy-Ashe has displayed a proclivity towards African and African American art. This is evident in the three full collections documenting her travels in West Africa or her book about the Gullah community of South Carolina, Daufuskie Island: A Photographic Essay. She reveals her immediate personal experience in Daddy and Me, which features photos of her late husband, Arthur Ashe, and her daughter, Camera. She has published numerous books featuring not only her own work, but also that of unknown black photographers of the past. In 2001, her fourth book of photographs was published, titled The African Flower: The Singing of Angels. The narrative of her photographs extends beyond a picture or a series of pictures to create a greater context for the artist herself within photography, womanhood and the African American experience.

Jeanne Moutoussamy-Ashe was interviewed by The HistoryMakers on January 15, 2007.