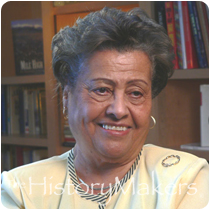 Favorite Color:
Yellow
Favorite Food:
Lobster
Favorite Time of Year:
Winter
Favorite Vacation Spot:
Italy
Favorite Quote:
To Whom Much Is Given, Much Is Required.

Favorite Color:
Yellow
Favorite Food:
Lobster
Favorite Time of Year:
Winter
Favorite Vacation Spot:
Italy
Favorite Quote:
To Whom Much Is Given, Much Is Required.

See how Jeanne Brayboy is related to other HistoryMakers
Donate Now

Civil rights activist and elementary school music teacher Jeanne Martin Brayboy was born on February 23, 1930, in Camden, South Carolina. Her father, John Wendell Martin, was a high school teacher and football coach; and he started the first African American athletic conference in South Carolina. Her mother, June Singleton Martin, was a librarian. Brayboy and her younger sister, Thomasina, grew up under strict segregation, and they recognized the disparities between whites and blacks in Camden’s educational system. She attended Mather Academy, an African American boarding school founded in 1867 by the Women’s Division of the Northern Methodist Church in Camden, where the teachers stressed academic excellence and community responsibility. Brayboy graduated from Mather Academy in 1947.

Brayboy went on to attend Bennett College in Greensboro, North Carolina, as a music major, where she became active in the Bennett Choir among other campus activities. In 1951, Brayboy graduated from Bennett College with honors and received her B.A. degree in music. She entered Boston University to pursue her M.A. degree in music education. During her tenure at Boston University, Brayboy met Martin Luther King, Jr. Brayboy and King were a part of a small group of friends that attended black social gatherings on campus. She graduated from Boston University in 1953, and started her teaching career in Charlotte, North Carolina. In 1954, she married the late Dr. Jack Brayboy, who was an administrator at Johnson C. Smith University in Charlotte, North Carolina.

The mother of two adult children, Jack and Joyce, Brayboy devotes her time to many civic organizations including the Charlotte Symphony Orchestra, Levine Museum of the New South and the Foundation for the Carolinas. In 2011, Brayboy was awarded the Marie R. Rowe Award by the Symphony Guild of Charlotte, Inc.

Jeanne Martin Brayboy was interviewed by The HistoryMakers on June 20, 2007.

See how Jeanne Brayboy is related to other HistoryMakers
Donate Now
Click Here To Explore The Archive Today!