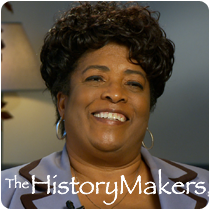 See how Jeanette Jones is related to other HistoryMakers

In 1976, Jones was hired as an assistant professor of biology at Alabama A&M University and became a member of the graduate faculty. Jones was named full professor of biology in 1986 while serving concurrently as an adjunct professor in the College of Pharmacy and Pharmaceutical Sciences at Florida Agricultural and Mechanical University where she worked on a special project with the National Aeronautics and Space Administration (NASA). In 1991, Jones became the first female appointed as the vice president of research and development Alabama A&M University. Jones then was appointed as the director of the Center for Biomedical, Behavioral and Environmental Research at Alabama A & M University. In 1992, she was appointed to U.S. Army Science Board by the U.S. Secretary of the Army, Togo West, served until 1998, and was reappointed in 2004 as a member of the U.S. Army Science Board under U.S. Army Secretary Francis J. Harvey. Jones moved to Jackson State University in Mississippi where she served on the Research Centers in Minority Institutions’ External Advisory Committee. She has also acted as consultant for federal agencies on training programs to attract women and minorities to STEM disciplines.

Jones was listed in the World’s Women Who’s Who (1975) and she was named an Outstanding Young Woman of America in 1978. Jones received the distinguished service award from the Beta Beta Beta National Biological Honor Society and the Significant Service Award from the NASA Space Life Sciences Training Program. In 2003, the National Institutes of Health (NIH) gave her its Extramural Associate Research Development Award. At Alabama A&M University, she was bestowed the Outstanding Leadership Award, a Resolution for Distinguished Service from the Board of Trustees, and was named Woman of the Year in 1990 and 2006.

Jeanette Jones was interviewed by The HistoryMakers on 4/10/2013.

See how Jeanette Jones is related to other HistoryMakers
Click Here To Explore The Archive Today!