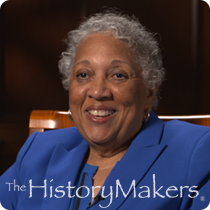 See how Jean Boone is related to other HistoryMakers

Newspaper executive Jean Boone was born on March 14, 1943 in Columbia, South Carolina to Helen Patterson and Daniel Patterson. Boone graduated from C.A. Johnson High School in Columbia in 1960, and went on to earn her B.A. degree in sociology and anthropology from Dillard University in New Orleans, Louisiana in 1962. She then received her M.S. degree in social work in 1966 from Boston University.

After graduating from Boston University, Boone moved to Richmond, Virginia, where her husband, Raymond Boone, Sr., was editor of the Richmond Afro-American. She became an adjunct professor of education at Virginia Commonwealth University. She also worked as the associate director for housing and economic development for the Urban League of Richmond. In 1981, Boone joined the Children’s Defense Fund as the director of state and local affairs, serving until 1989. In 1988, Boone also served as the manager of community affairs and marketing for the Baltimore Symphony Orchestra. When Boone’s husband established Paradigm Communications, Inc. in 1991, Boone joined him as advertising director. The following year, Paradigm Communications, Inc. published the inaugural issue of the Richmond Free Press on January 16, 1992. Boone was named publisher of the Richmond Free Press in late June 2014 by the board of directors of Paradigm Communications, Inc. after her husband’s death.

Under the leadership of Boone and her late husband, the Richmond Free Press’ accomplishments were recognized by the Virginia Press Association, the Virginia Trial Lawyers Association, the National Newspaper Publishers Association, the NAACP and the Virginia Legislative Black Caucus. In 2001, the newspaper was the recipient of the Best in Commercial Renovation Award in recognition of its leadership during a downtown revitalization project. Boone was honored by the YWCA of Greater Richmond with the 2004 Outstanding Women in Communications Award and at Hattitude 2016: Hats Off to Women, which was hosted by the American Business Women’s Association. Boone served on the board of Housing Opportunities Made Equal of Virginia, Inc.

Jean Boone was interviewed by The HistoryMakers on December 9, 2016.

See how Jean Boone is related to other HistoryMakers
Click Here To Explore The Archive Today!