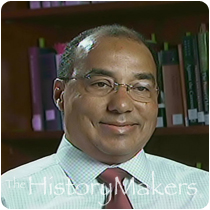 See how Jay Harris is related to other HistoryMakers

In 1970, Harris began working at "The New Journal" in Wilmington, Deleware as an editor and reporter. Harris worked for Northwestern University's Medill School of Journalism as a professor and assistant dean from 1975-1982. While working for Northwestern University, Harris initiated the American Society of Newspaper Editors' national census of minority employment. Through the initiation of this census Harris earned a position on the National Association of Black Journalists' list of the 100 Most Influential Black Journalists of the 20th Century. In 1982, Harris became a correspondent and columnist for the Gannett News Service and in 1985, he became the executive editor for the Philadelphia Daily News under Knight Ridder, Inc. Three years later, Harris was promoted to the corporate staff of Knight Ridder's Newspaper Division, where he served as assistant to the president; by 1990, he had become Vice President of Operations. Harris became chairman and publisher of the SJ Mercury News in 1994, and ran the Mercury News from 1994 until 2001. His accomplishments during his tenure at the newspaper include the launching of Nuevo Mundo and Viet Mercury, which are Spanish and Vietnamese versions of Mercury News. In addition, Harris worked to diversify the staff to include 50 percent female employees and more than 30 percent ethnic minority employees.

After leaving Mercury News, Harris joined the faculty of the University of Southern California in October of 2002. At the University of Southern California, Harris held the Wallis Annenberg Chair in Journalism and Communication at the Annenberg School for Communication and worked as the founding director of The Center for the Study of Journalism and Democracy. He also worked as the Presidential Professor at Santa Clara University in Santa Clara, California.

Jay Harris was interviewed by The HistoryMakers on October 7, 2005.

See how Jay Harris is related to other HistoryMakers
Click Here To Explore The Archive Today!