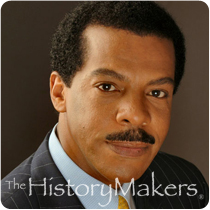 See how Jason Miccolo Johnson is related to other HistoryMakers

Born November 21, 1956, in Hayti, Missouri, photographer Jason Miccolo Johnson is one of five children. Johnson received most of his education in Memphis, Tennessee. He started his college education at Memphis State University before relocating to Washington, D.C., to attend Howard University. Johnson graduated from Howard in 1994.

Largely self-taught, Johnson served in the U.S. Navy as a photographer. He went on from 1981 to 1982 to work for ABC News as a production assistant. Then, in 1985, Johnson joined USA Today as the photography lab director, a position he held until 1989. In May 1989, Johnson decided to enter the world of freelance, doing portrait photographs of leaders such as Thurgood Marshall and Nelson Mandela. He also developed a healthy stable of Fortune 500 clients such as McDonald's and Anheuser-Busch. Johnson was also chosen as one of the photographers for both of President Bill Clinton's inaugurations, as well as for the Million Man March.

Johnson is active with the American Society of Media Photographers and works with Beacon House, a neighborhood organization that supports at-risk youth in Washington, D.C. He also lectures on photography at conferences and universities throughout the United States.

Johnson's work has appeared in Black Enterprise, Entrepreneur, Glamour, Newsweek, Essence, Ebony and Time. His work can also be seen on permanent display in the St. Louis Art Museum and the Museum of Fine Art in Houston, as well as in numerous exhibitions both in the United States and abroad. Johnson has published more than fifteen books. His latest is entitled, Soul Sanctuary: Images of the African American Worship Experience. Johnson resides in Washington, D.C.

See how Jason Miccolo Johnson is related to other HistoryMakers
Click Here To Explore The Archive Today!