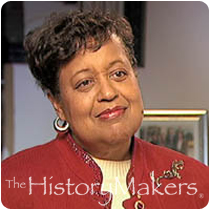 See how Jannette L. Dates is related to other HistoryMakers
Donate Now

Jannette Dates is an educator and critical commentator on the images of African Americans in the media. Born on March 17, 1937 in Baltimore, Maryland, she was educated at the city's Coleridge Taylor Elementary School and Booker T. Washington Junior High School before attending Frederick Douglass High School. She remained in Baltimore for her collegiate education, graduating with a B.S. from Coppin State University.

After college, she became a teacher in the Baltimore City Public School System in 1958. In 1964, she became a television demonstration teacher for the school system, working in conjunction with three local television stations, WBAL, WJZ and WMAR.

Continuing her educational career in her hometown, she became an assistant professor at Morgan State University in 1971. During her time at Morgan State, Dates became the producer, writer and anchor for North Star, a weekly hour-long show featuring local and national African American entertainment and sports personalities. It aired on WBAL from 1972 to 1973, and she also worked with the station as a co-producer on the twenty-two-part series, The Negro in U.S. History, which aired during the 1973-1974 season.

In 1978, she published her first article, "Thoughts on Black Stereotypes in Television," which appeared in Ethnic Images in American Film and Television. In 1981, she became an assistant professor at nearby Howard University in Washington, D.C., working in the school's Department of Radio, Film, and Television.

In the years since she joined Howard, Dates has been a frequent speaker on radio talk shows in various cities the country, and she has also been featured as a panelist on National Public Radio, CNN, and C-SPAN, addressing issues of the media treatment of African Americans and other racial and ethnic groups. She has contributed chapters for thirteen books, and has written three scholarly articles and been published several other times. In 1996, she became dean of the School of Communication at Howard.

Dates also has a Ph. D. from the University of Maryland at College Park, an M.Ed. from Johns Hopkins University, a certificate in the Management Development Program from Harvard University, and has served as a fellow at the Freedom Forum Media Studies Center at Columbia University.

See how Jannette L. Dates is related to other HistoryMakers
Donate Now
Click Here To Explore The Archive Today!