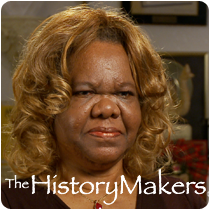 See how Janie Bradford is related to other HistoryMakers

In Detroit, Bradford lived with her sister, Clea Ethel. Their neighbor was Jackie Wilson, who introduced Bradford to the founder of Motown Records, Berry Gordy. In 1958, Bradford joined Motown Records as a secretary, but soon became a songwriter for Motown singers. The first two songs she co-authored with Gordy were included on Jackie Wilson’s album, Lonely Teardrops. The next collaboration that Bradford co-wrote with Gordy was the song “Money (That’s What I Want),” which has been covered over two hundred times by artists such as The Beatles, The Rolling Stones, Muddy Watters, The Supremes, The Flying Lizards and Boyz II Men. Bradford was later promoted to director of writer’s relations at Motown Records. During her twenty-years as a songwriter with Motown Records, she wrote numerous hit songs such as Marv Johnson’s “All The Love I’ve Got” in 1960, Stevie Wonder’s “Contract on Love” in 1962, Mary Well’s “Your Old Standby” in 1963, The Supremes’ “Tie a String Around Your Finger” in 1963, The Temptations’ “Too Busy Thinking About My Baby” in 1963, and Carolyn Crawford’s “My Smile Is Just a Frown (Turned Upside Down)” in 1964. Bradford later founded Mountain Goat Music and opened Music Notes Gift Shop in Beverly Hills, California. In 2010, Bradford established Twin Records with songwriter and singer Marilyn McLeod. Together Bradford and McLeod produced Bradford the album titled, I Believe in Me.

Bradford is the executive director of the Janie Bradford Heroes and Legends (HAL) Scholarship Fund and producer of the HAL Awards. She has been honored by Broadcast Music, Inc. with a Certificate of Achievement for her co-authoring “Money” and “Too Busy Thinkin’ About My Baby.” She received the Vivian Carter Award from Jack the Rapper in 1989, and was named one of Motown Historical Museum’s Women of Motown in 2000.

See how Janie Bradford is related to other HistoryMakers
Click Here To Explore The Archive Today!