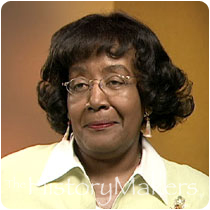 Favorite Color:
Blue
Favorite Food:
Broccoli
Favorite Time of Year:
Winter
Favorite Vacation Spot:
Houston, Texas
Favorite Quote:
Do Not Go Where The Path May Lead. Go, Instead, Where There Is No Path And Leave A Trail.

Favorite Color:
Blue
Favorite Food:
Broccoli
Favorite Time of Year:
Winter
Favorite Vacation Spot:
Houston, Texas
Favorite Quote:
Do Not Go Where The Path May Lead. Go, Instead, Where There Is No Path And Leave A Trail.

See how Janet Purnell is related to other HistoryMakers
Donate Now

Educator and minority advocate Janet Purnell was born in Akron, Ohio on August 30, 1936 and has been a life-long resident. She studied education at the University of Akron, where she earned both her B.S. (1959) and her M.S. (1971).

For twenty-two years, Purnell worked for the Akron Public Schools as both an elementary school teacher and principal. In 1967, she led alumni in successfully lobbying for the establishment of an anti-segregation policy on the University of Akron campus. In 1982, she became the Executive Director of the Akron Metropolitan Housing Authority. In this role, she oversaw the public housing for 20,000 residents and served as a lobbyist on behalf of the 40 largest housing authorities. She later entered the private sector, acting as the CEO of Navic & Associates, where she served as a local and national consultant on establishing diversity in the workplace. In 1990, she returned to her alma mater to sit on the president's cabinet, overseeing all minority initiatives on campus. This position led to her subsequent role as the first Executive Director of Minority Development at the University. Purnell was responsible for securing funding to support minority initiatives and distributing annual scholarship funds to minority students. In honor of Purnell's appointment to chair the University of Akron's Board of Trustees, the Zeta Theta Omega Sorority established the Janet B. Purnell Project Self-Sufficiency Endowment, which annually awards a scholarship to a single mother.

Since 1985, she has provided leadership to historic preservation efforts in Akron. She designed and implemented the Dr. Shirla R. McClain Gallery of Akron's Black History and Culture program and spearheaded the establishment of the Gallery's endowment fund and curriculum guides. She has been a member of the Alpha Kappa Alpha Sorority for over forty years; has acted a Trustee for the Akron Urban League and Akron Musical Association; serves as the Secretary of the Akron Chapter of the NAACP; is the Vice-Chairman of the Akron Black Women's Leadership Caucus and Chair of the Mt. Olive Baptist Church Trustee Ministry. In 2001, Purnell was honored as one of 100 outstanding women of Summit County. She is the mother of two sons.

See how Janet Purnell is related to other HistoryMakers
Donate Now
Click Here To Explore The Archive Today!